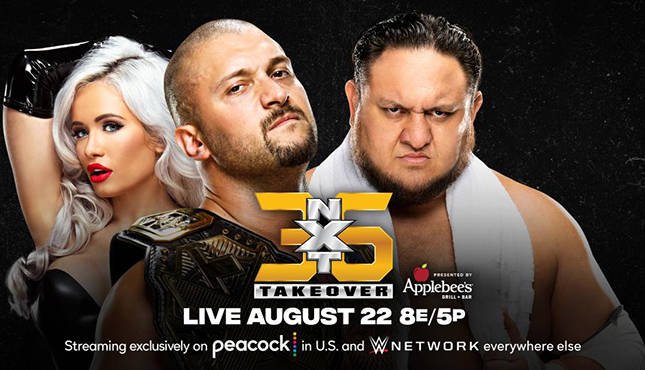 Million Dollar Title Match
LA Knight (c) vs. Cameron Grimes (w/Ted DiBiase)
Grimes is just great and smooth in ring both offensively and defensively. Having DiBiase help throw Grimes into Knight was a fantastic move and idea. Fantastic match here. Both men worked great together, the in ring storytelling and chemistry was there, and it had you drawn in at all times. 4.5 / 5
WWE NXT Women’s Title Match
Raquel Gonzalez (c) vs. Dakota Kai
This was a solid bout between the two. Good storytelling and Dakota took quite the crazy and hard hits here. Both women though not only clearly missed some moves but also the size difference showed as Dakota had to help or hold onto Gonzalez for some moves. Still a good match between the two with some fine spots. 3/5
WWE NXT United Kingdom Title Match
WALTER (c) vs. Ilja Dragunov
This will go down as one of the best matches of 2021. Hard hitting is an understatement and emotion oozes out at every hit here as Ilja fights with every fiber of his being to dethrone Walters UK title streak. Both men here leave blood bruises on the other with some of the hardest hits you’ll see this year. Perfectly paced, perfect chemistry, perfect emotions, and just a fantastic match. 5 / 5
Best Two Out Of Three Falls Match
Kyle O’Reilly vs. Adam Cole
This was a good match to finish off their story line for the first 2 parts of it. Kyle sold his ribs, there was good story telling, it had its ups and downs that kept you going. Once it got to the cage part though the match fell apart, selling seemed to be forgotten and the ending was just sort of dumb. A solid possible send off for Cole though. 3.5 / 5
WWE NXT Title Match
Karrion Kross (c) vs. Samoa Joe
This honestly felt so lackluster. Kross has been on a downward trend lately and as NXT champ just been uneventful and bland. Joe returning is cool but this match just felt like the two didn’t connect well. It had its moments but was on the short side and not like we’d expect these two brutes to go at it. 2 / 5
Tags: 2021 Adam Cole Karrion Kross NXT NXT Takeover NXT Takeover 36 Pro Wrestling Pro Wrestling review Professional Wrestling Samoa Joe Takeover Takeover 36 Walter Wrestling Wrestling Review WWE WWE NXT