Father Figures is a comedy that by all accounts should be least funny to some degree, yet even with a good cast and premise falls drastically short of what it could be.

We follow Peter and Kyle who upon learning from their mother at her wedding that their father actually isn’t deceased plot a trip together to go find their real dad. It isn’t a very deep story but at the most should provide laughs.

Sadly though here the humor falls flat 95% of the time. Jokes just don’t ever connect and it almost seems like the film doesn’t really know what type of comedy it is going for. It isn’t raunchy enough to be considered a raunchy comedy, there is little slapstick humor, and the sentimental bond here doesn’t hold through either.

The sentimental moments themselves are hollow and unbearable with the poor emotional strings they want to pull too. As most comedies have a more serious moment to them to end the story or as it’s climax, here though it just doesn’t work together. 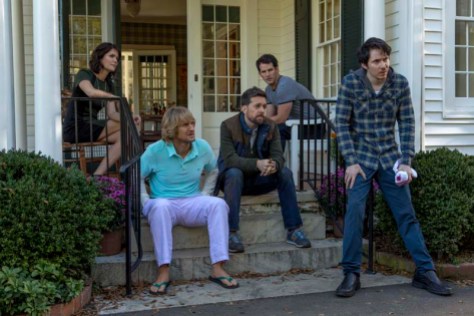 This is all made so much worse because we have such a good cast here too. Ed Helms seems to try his best for this to work and I’ve always enjoyed Owen Wilson in roles like this but he also seems to be phoning it in here. Supporting roles by Terry Bradshaw, Ving Rhames, JK Simmons, and Christopher Walken are a sight to see but sadly all fall short because of the horrible writing here.

Overall Father Figures at nearly a two hour run time is just a prolonged mess. With too long of a run time dragging moments that aren’t funny or even entertaining on far too long this is one film that even with a solid cast just couldn’t save itself. Watch this on tv down the line if you must, otherwise it just really isn’t worth your time.

With 2006’s ‘The Fall Of Ideals’, All That Remains released a record that’s one of metalcore’s best

With 2006’s ‘The Fall Of Ideals’, All That Remains released a record that’s one of metalcore’s best

Thirteen albums into their career, Sevendust are as musically relevant as ever

Thirteen albums into their career, Sevendust are as musically relevant as ever

The Mosh Network is a directory and your one-stop shop to find independent bands from across the world. Their website features an interactive map, news, and a band archive!