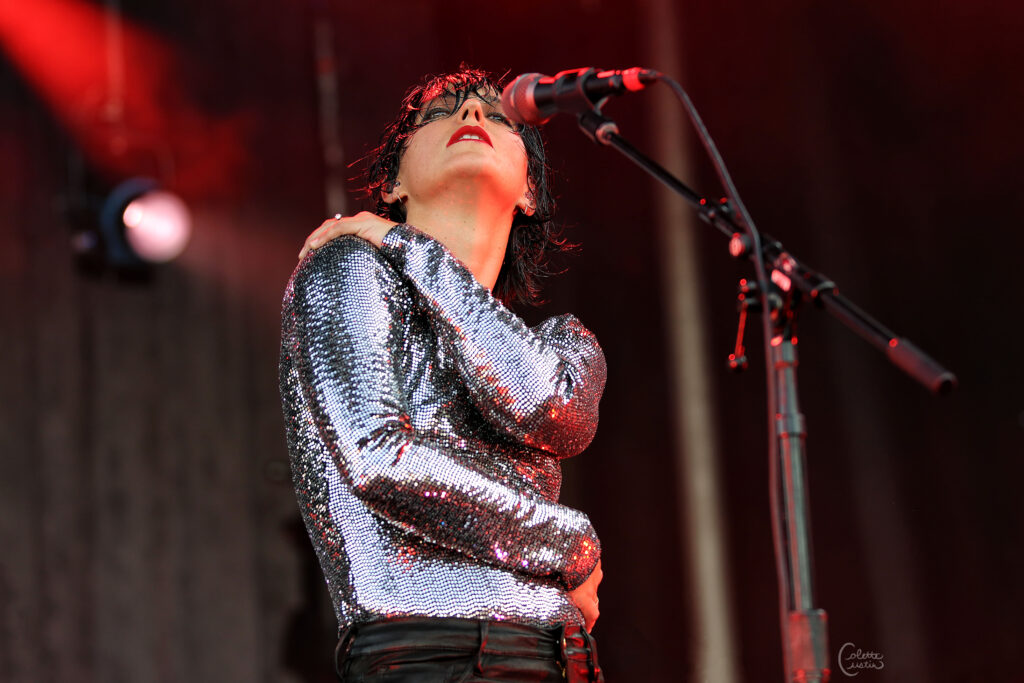 In its second week gracing fans with a fresh outdoor music experience unlike any other Chicagoland has ever seen, the Salt Shed welcomed a dynamic trio of Sharon Van Etten, Angel Olsen, and Julien Baker on Wednesday night. The newly minted venue along the Chicago River beamed with that beautiful “magic hour” light we all know but don’t appreciate enough.

Quinn Christopherson opened and immediately confirmed the claim donned on tote bags at the merch table, “I came to see the Wild Hearts Tour and all I got was emotional”. His NPR acclaim for the song “Erase Me,” about his personal journeys with his gender identity, was reflective in the beauty and sorrow of “Bubblegum”. Los Angeles native Gracie Gray joined Christopherson after that first song, and their soulful and jangly duets ramped up the crowd for what was to come.

Julien Baker graced the stage alone for the beginning of “Sprained Ankle” and her powerhouse band soon followed. Baker graciously spoke about her band and crew, noting that “she couldn’t have made any of this happen without them”. The energy between Baker and the crowd was especially palpable as she sang “Heartline” from her newest full-length album released in 2021, “Little Oblivions”.

Powerhouse singer-songwriter Sharon Van Etten soon followed wearing an incredible silvery disco shirt, an outfit perfect to wear as the artist sharing the Midwestern sunset with the crowd. Etten spoke about her son and home as being influential in keeping her inspired over the last few years- reflective of her move during the pandemic to find a new groove as she pursued a psychology degree. An upbeat remix of “Every Time the Sun Comes Up” was a welcome and beautiful new look at a quieter studio song. Complementing “I’ll Try” from her new album “We’ve Been Going About This All Wrong,” Etten finished her set with the hit “Seventeen” to a roaring and energetic crowd, one that seemed to be asking for a headlining encore.

Angel Olsen took the stage to end the night amidst moody stage lighting wearing a bright yellow romper to sing a trifecta of “Dream Thing,” “Ghost On,” and “Right Now,” from her newest record, “Big Time.” The contrast between the two really spoke to the night’s beautiful dichotomy between all the feelings- good and bad that we all seem to be facing with the current political and social landscape. Van Etten joined Olsen during the final moments on stage with a cover of Harry Neilson’s classic, “Without You.”