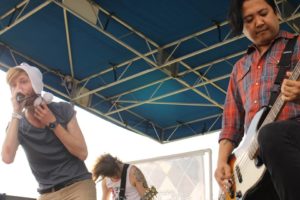 I recently caught up with one of Florida’s premier local acts, A Hero’s Fate after their set at The Big Orlando festival. We talked about upcoming plans for music, music videos and more. Check it out after the jump.
–

Q – We’re here at The Big Orlando festival (obviously) in Orlando, FL. You guys just finished your set a little while ago, I personally enjoyed it, but how did you guys feel about it?

Hayden – It was wonderful.

Hayden – Sometimes he throws up, and it’s kind of funny. But no, the kids were great, the response was great, we loved it.

Q – Are there any bands playing the fest that you’re personally excited to see?

Brian – It’s kind of a given, yeah. All of the local acts as well.

Q – You released “Terms And Conditions” back in February of 2012, are there any current plans for new music?

Blake – We actually played one of the new songs today.

Q – You’ve released music videos for two of the songs, the more recent being for “Running In Circles” which you released two days ago(12/5). Can you tell us a little bit about making the video, and what the idea behind it was?

Brian – Okay here’s the thing, we had prepped for a very long time, writing out storyboards, scenes, multiple locations, release forms for extras, it was going to be extremely elaborate….. (laughs). But as the crunch time got smaller and smaller towards the deadline… We ended up shooting it inside our house where we practice, for eight hours, going from one room to another room to another. And we’ve got our music video(laughs).

Brian – But it’s pretty nifty, because it depicts a lot of what the lyrics say as far as, no matter what we do in our lives, we’ll always come back to music. It’s running in circles, there’s no place I’d rather be in midst of great company.

Q – For each of you, what’s the best concert you’ve ever attended that you did not play?

Hayden – The Withershins in Champaign, IL with Hum. I’m from the 90’s, Hum was a big thing for me. They are good friends of mine, it was a wonderful thing.

Brian – The most recent is the only one I can think of at the moment, they’re all awesome. I went and saw Anberlin’s last show and it was really good, they always put on a good show. I was pretty sad.

Chris – Mine was definitely Duran Duran.

Q – What are some of your favorite music releases from this year?

Hayden – The Story So Far, that acoustic album is awesome. Teenagers dropped a new album.

Blake – Our friends in Set It Off just dropped a new album, it’s really good.

Q – For those who are not familiar with A Hero’s Fate, how would you describe your band to them? Not necessarily your sound, but the overall picture.

Brian – That’s usually what I end up hearing, is when people will come up to us after the show as tell us, “That was great, love the energy.”. I’ve always said this, only blind people go to shows for the music. But really, it’s all about positivity, friendship.

Brian – There are issues and irrelevant feelings that everybody experiences that no one has the balls to sing and talk about, and those who do get scrutinized. But fuck scrutiny, we do it anyway and people love us because they love the same stuff and they’re stoked they can relate with us. And we become friends, we’re all one big family.

Q – What can people expect from an A Hero’s Fate show?

Hayden – Us hanging out with you, saying hello to you.

Brian – I give lots of hugs.

Hayden – He hugs a lot, I like to give high fives. Chris likes to trade hats. Blake likes to trade his shoes, his Jordans especially. If he has Jordans on, he straightened them that night (laughs).

Q – Is there any last thing you’d like to say to any fans and supporters of A Hero’s Fate?

Hayden – I love you.

Blake – We love you, but Hayden loves you especially.

Brian – Do not be afraid to come up and say hi. Come talk to us, if you don’t know us, give it about twenty seconds…..yeah.