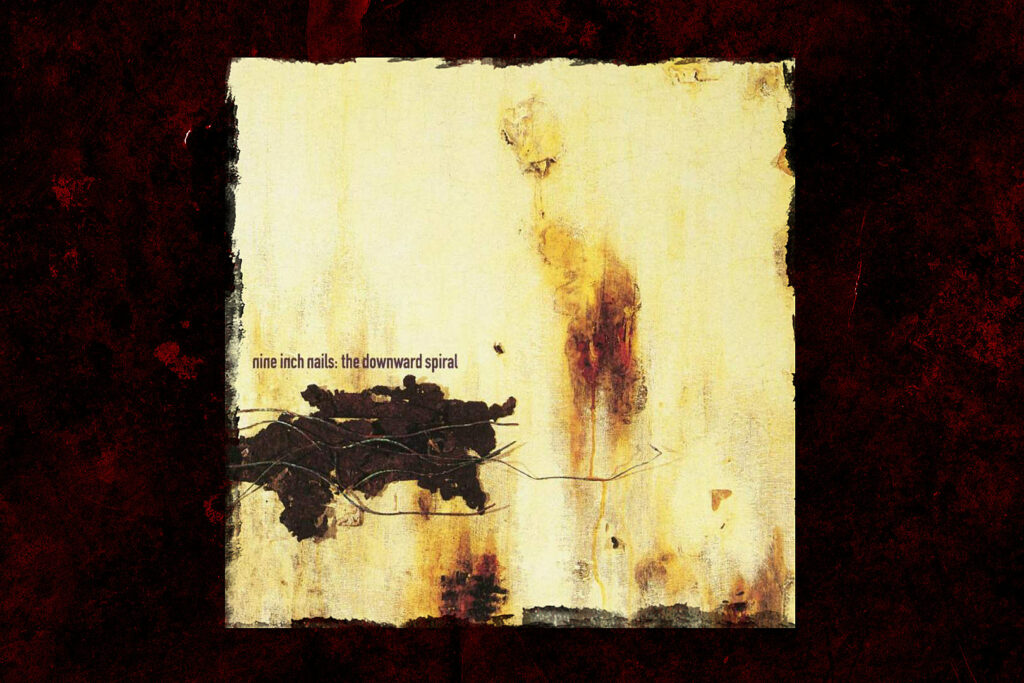 There’s countless records over the course of history that could be considered, well, statements. Kid A? That’s a statement because of how the left-field Radiohead album completely transformed the band into an electronic-heavy, generation-defining act. Hybrid Theory? The Linkin Park debut full-length changed the face of modern rock of the last 20+ years as we know it. Bring Me The Horizon’s Sandpit Turtle? Metalcore bands are still copying (or rewriting) that songwriting formula.

The Downward Spiral definitely qualifies as a definitive “statement“. Emerging at a time where grunge, hip-hop, alternative rock, and pop-punk were dominant genres in the music scene, the record built on what Trent Reznor created on 1992’s Broken EP and proved that harsh industrial rock + metal could have a place in the public consciousness. Of course, that already happened with NIN’s previous material, 1989 debut album Pretty Hate Machine, in particular.

Open to interpretation, The Downward Spiral is a semi-concept album about one person’s descent into madness. Bookending the record is the volatile industrial metal cut “Mr. Self Destruct”, and the despondent finale “Hurt”, which would see an impressive Johnny Cash cover almost a decade later. Both songs serve equal importance to The Downward Spiral as a whole. Sonically, “Mr. Self Destruct” is mostly a continuation of the much heavier industrial metal sound first explored on Broken. A song about control, it references and intimates motifs of sex, drugs, and overall addiction into a rage and frustration-addled track that sets the tone for the album you’re about to experience.

“GOD IS DEADDDDDDDDDD!”, screams Trent Reznor on “Heresy”. Clearly, he does NOT fuck around. Yet on “Hurt”, Reznor shows a harrowing display that would be emulated by many artists who emerged after him. Both on “Hurt” and the album as a whole, there’s not much (actually, any) room for subtleties. Of course, when you have the likes of King Crimson’s Adrian Belew and Jane’s Addiction’s Stephen Jenkins wanting to contribute to your career-defining record, would you be subtle? Surely Trent Reznor can answer that one.

Foregoing the traditional route of industrial artists utilizing cryptic lyrics to connect with their listeners (and themselves), Reznor’s lyrics are very pointed and direct here instead. It’s both part of the extremely personal nature of the record overall (one that serves effectively as a microcosm of NIN’s discography as a whole) as well as the message and story it tells to its listeners. There’s even room for satirization on tracks like “Big Man With A Gun”, which American conservatives hilariously decried as attacking the GOP (and clearly, they missed the fucking point entirely). No, it’s a darkly humorous track that pokes fun at the misogynistic gangsta rap era that was very much in full swing by the time of TDS’s recording. The lyrics are ridiculous, but intentionally so.

The closest thing to a “pop” song on the album definitely wasn’t supposed to be interpreted as such, considering Spiral’s decidedly non-commercial (in terms of intention, anyway) intent. “Closer” became NIN’s signature song anyway, despite a chorus that says the word “fuck” every other line. A case of the visuals matching the music within, the song’s accessibility meant that “Closer” would inevitably get played in clubs around the world. Not surprising, really. Meant to be unsettling, the controversial video helped spur on attention and is still infamous today, if you watch the uncensored version. Remember, this is the same guy that made the Broken movie two years earlier.

The album thankfully doesn’t completely abandon the qualities that made NIN’s earliest material so accessible to a wider audience, though. Mid-album cut “Ruiner” certainly has some of the danceable qualities that were established on Pretty Hate Machine. It’s a cut that bounces in both melodic and aggressive fashion, with a chorus that will inevitably get stuck in your head. Making industrial music palatable to a wide audience is an impressive feat, to be sure.

Even the track sequencing is genius. Accurately describing a person’s descent into madness, the way the hyper aggressive industrial metal blast of “March Of The Pigs” segues into “Closer” is brilliant. It’s an often overlooked trait in a defining record like this one.

Once hailed as one of the most vital musicians in the world in a 1997 profile on Time Magazine, The Downward Spiral was the culmination of a couple years of turmoil, substance abuse – and it resulted in one of the most important albums of the ’90s, in any genre. Selling over 110,000 copies in the USA alone in its first week of release, it’s an album that combined both commercial success with the kind of life-affirming and influential artistry that would see record labels slurp up almost any band that would be considered “industrial”. In The Downward Spiral’s case, it proved that yes, nihilism can be practical (and successful).