I met up with keyboardist Brandon Bliss of Monster Truck after their set at the Welcome To Rockville Festival, we talked about touring, their debut album “Furiosity”, and more. Monster Truck are currently out supporting Alter Bridge on tour, be sure to check out any remaining dates, as well as future tour announcements from the band.
–

Q – You guys finished your set a little while ago, I personally enjoyed it, but how did you feel about it?

Brandon – It felt awesome. I didn’t know what kind of crowd to expect, we’ve only been to Jacksonville once before. Even ten or fifteen minutes before our set there were maybe thirty of forty people there right along the rail, we were wondering how it was going to be, and sure enough the band on the stage next to us finished and they all slid over to ours.

Q – Monster Truck are currently out on tour supporting Alter Bridge, how has the tour been treating you so far?

Brandon – It’s been really cool. It’s one of those kind of tours that’s a little bit of a step above some of the other tours we’re used to doing. Really nice production, really nice venues, mostly sold out shows everywhere. It’s impressed us. The guys in Alter Bridge have been really nice. We knew Miles(Kennedy, Alter Bridge) previous to this tour, which is basically how we got on, then we met the rest of the band, who were all really awesome to us, and on top of it the crowd responses have been really good too. Pretty much the best tour we could have asked for.

Q – Has this overall been one of the biggest tours you’ve done in the U.S?

Brandon – We don’t hardly ever play shows much bigger than these. Back in Canada we were lucky enough to open for Slash, which is also how we met Miles. We did a tour with Alice In Chains last summer, and it was a mix of arenas and theaters, but other than that, not too many shows of those size.

Q – Your debut full length album, “Furiosity”, turns a year old next month. How has the overall reception to the album been like?

Brandon – It’s been pretty good so far actually, it’s been a slow build. In Canada they were ready for it, we had some songs on the radio from our EP before it, and the Canadian press were really into it, so they were ready for it, but everywhere else we’ve been really working hard trying to get the word out about it, and it keeps getting better all of the time. We’re a fairly unknown band, we can’t really ask for much more than for it to keep on improving.

Q – What are the lyrical themes for “Furiosity” ?

Q – What has been your favorite song to play live lately?

Brandon – That’s a tough call because I’ve been really having fun with all of them. We’ve been doing these bigger sets in Europe just a few weeks ago, we had to play an hour every night which is basically almost all of our material(laughs). We were getting really good with playing almost all of them. “For The Sun” is a great one, it’s a slow burner and it really builds nice, and we’ve been trying to be as dynamic as we can in our playing, and that one is a good showcase for it. I love the ragers too, “Old Train” is a real fun one, the ones where the crowd sing along are always the most fun, and they’ve been chanting for that song lately. I like “Call It A Spade” a lot, it’s a real head-banger, it’s a ZZ Top kind of song, hence the name(laughs). It’s all fun, it’s all the same feeling, and all of the same vibe.

Q – You mentioned doing the co-headlining tour in Europe, which was the Lord Of The Riff tour with Scorpion Child. Is there any chance the two of your bands teaming up for a U.S run?

Brandon – We’ve talked about it, and we would love to do that. It’s definitely a possibility, we just have to put the idea out to the agents and managers and let them work it out. It all depends on where everyone wants us to go, and at what time. They want to get us back in Europe in the fall, I don’t know what Scorpion Child’s plans are, but if we could do it we’re definitely into it. It’s hard to find bands that are similar to us, and as soon as we found those guys we were laughing about it the second day of the tour, how we were finally on a rock n’ roll tour(laughs).

Q – Monster Truck were announced to play the Heavy MTL fest with other acts such as Metallica, Slayer, Anthrax, Lamb Of God, among others. What are your expectations for the festival, and are there any bands you’re personally excited to see?

Brandon – You named them, you don’t get to see those bands very often, especially that many bands that are that big. I’ve never seen Metallica, so that’s got to be the biggest one for me. I haven’t seen most of them live, and I want to see what they can do. We want to pick whatever we can out of those, there’s a reason why those bands are so big. Maybe we can pick some elements and help get ourselves to that stage eventually(laughs). I also want to see The Offspring, Bad Religion, D.R.I,  punk rock is my root. The Offspring are another one I’ve never seen. I had their “Smash” cd when I was thirteen years old.

Q – The song “Sweet Mountain River” was featured on Rocksmith 2014. How did it come about getting the song put on the game?

Brandon – We have people at the record label who are always out looking for that kind of stuff. We did N.H.L 2013, which is a really popular game up in Canada, and it has a sort of cult following everywhere else. We found there was a really good response from it, we kept talking with people at shows who said they discovered us because of that game, so we said “Let’s get as many of those as we can.”, and Rocksmith was the next game that we got. It’s been seeing an insane reaction, people saying they learned about us through that video game, and nowadays you have to get your name out any way you can.

Q – Have you played your song on the game?

Brandon – I have not(laughs). I’ve actually yet to play Rocksmith, I’ve only ever played Guitar Hero, but not Rocksmith.

Brandon – I used to live in Toronto back in the mid 2000’s, and I got a tip off that the Rolling Stones were playing a secret club show at a place called The Phoenix, which holds about 900 at capacity. The Rolling Stones used to rehearse in Toronto for I think three tours, one in the late 90’s , early 2000’s and mid 2000’s, I think it was when they put out “Forty Licks”. So they would rehearse in Toronto and then they would do a secret show. I was working at a club and the Live Nation people tipped us off and said there’s a special show at The Phoenix tomorrow, and we knew whose been in town lately. And sure enough my girlfriend at the time and I went down, everyone there was huddled around, and we just kept shuffling our way towards the door, and they said they were only got to take twenty more people inside, and luckily enough we were in that twenty. So yeah, we got to see The Rolling Stones at a small club, and that was breathtaking to see them. They have so much power on stage, Mick Jagger persona and stage presence is incomparable.

Brandon – I honestly don’t pay great attention to all of that stuff, I’m still listening to old music all of the time. The Scorpion Child album definitely. We had met them back in the fall, and we knew we were going to tour with them, and it seems to always come down to a few days before tour where I’m like, “I have to go get their record.”, but I said to myself I’m going to hear it on tour so I waited. But that was definitely a big one for me. I’m looking forward to the new Slash record, that’s coming out soon. Ever since we played with Slash we said we have to be in tune with these guys, he’s such a legend, and he’s been so cool to us.

Q – What’s the one band you’ve never played with that you wish you could tour with/open for?

Brandon – Two years ago we got to open for Deep Purple for four shows, and that’s pretty much the pinnacle, not that there aren’t other bands. Playing the festival with Metallica is definitely a big one. We’ve already done a run with Alice In Chains, all of these legendary bands that are still kicking around, we’ve been getting a chance for it. Queens Of The Stone Age would be really cool.

Q – After your run with Alter Bridge finishes, what’s next for Monster Truck?

Brandon – We have a bunch of festivals at home during summer in Canada, including Heavy MTL. We have another run with Alice In Chains in the northern part of America, with a few Canadian shows in August. We’re writing a lot actually, we know we have to be recorded by the end of the year, so we can hit all of the big European festivals and here in America. Actually, the very first thing we do after the Alice In Chains run is play Bonnaroo festival in Tennessee. We’re going to the festival we hear is really cool over in Spain, called Azkena rock fest, Wolfmother is playing, as well as Elvis Costello . I think Kvelertek are playing it as well. It’s quite an eclectic lineup.

Q – Thanks for taking the time to talk with us. Is there anything you’d like to say to any fans and supporters of Monster Truck?

Brandon – Keep tuned, we’re playing all of the time, we are writing a new record which will probably be out in about a year from now, if not earlier. We’re working on new songs all the time during sound check and in the dressing room, we’re getting ready for it, really excited about some of the tunes we’ve got building. We’ll just try to give you more of what we’ve been doing, even step it up I hope. 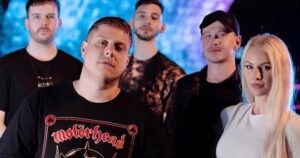