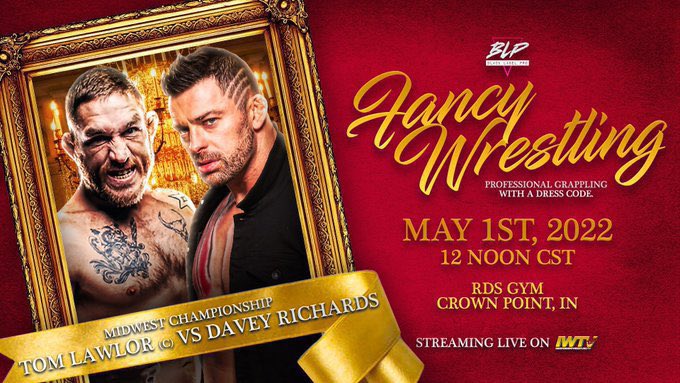 A good opening match that got the crowd excited. Back and forth fast paced action between the move and Myron doing his flying move over the corner is always good to see. Went a little long but never really lost its pacing.

An okay match. Crowd was into it mostly but it just never picked up to an exciting pace. Alice is still newer and shows and Shazza didn’t look too great. Too many moves that looked weak and not hitting really.

A big guy fight. Some exciting moments but again nothing special here.

It took forever to actually get going because of horrible comedy bits. The wrestling was average at best and I can’t stand the comedy bits here or Billie.

Really good height on a jump to the outside. Then though one guy did a move that looked like nonsense and ended up landing on his neck and clearly hurt himself wrong making them show just how fresh some of these guys are. Still some really good tag moves done here with both teams. Still though this was a really good tag match when the flow picked up.

Tom got busted open good. This was a slow technical based match. I don’t always mind those but this one just never caught on really for me. I know both can wrestle and have great matches but this just didn’t do anything for me.

A fine but uneventful match. Seemed slower than Austin usually does. Plus no one assumed he was losing his Impact title mid card at a random indy show.

Josh Alexander rules. This was a solid enough but felt like a quick match. No one expects him to lose his title here either but at least there was some back and forth between the offense here.

An okay match. A bit gimmicky at one point with a dive. It felt like it never really picked up though.

A very solid 4 way main event. It was a spot fest as expected and only 10ish minutes which was perfect for this. PCO did his usual, everyone got their moves in, and it didn’t try to be too much.