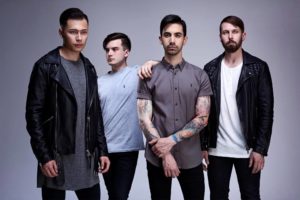 There’s something truly special about hearing a brand new band that seems likely to take the rock and alternative metal scenes by storm. Defying easy categorization after just 2 singles, rock newcomers Vespera could easily be compared to obvious scene cornerstones like Northlane, Deftones, and a more melodic Chevelle – but they are an entity all their own. There’s even hints of tech-heavy progressive metal in the band’s new single “Obsidian Dreams” – think Periphery, Tesseract – with a positively rapturous chorus that has all the hooks you’d want in this type of music.

Produced by Taylor Larson (Periphery, Darkest Hour), the track is the 2nd to be released from Vespera’s upcoming album, the 15-track behemoth The Thoughts That Plague You, which is set for release sometime in 2018. Vocalist Jonathan Wolfe (a former touring member of Slaves and Falling In Reverse) is proving himself as a vocalist to watch out for with dynamic range and ability to craft massive vocal hooks.