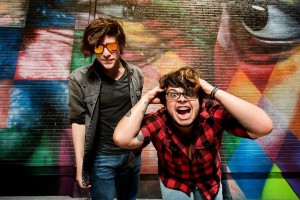 A relatively new band, only forming in July, Renaissance Kids quickly pushed out a four track EP titled Another Life, which is presumably named after the two quit their old band that had multiple record deals on the table. Why would one do such a thing? We’ll leave that to them.

Another Life may only be four tracks, but they’re filled with melody, emotion and your usual post-hardcore drama. While I tend to stay away from music like this, it reminded me of LindaMar, which also happens to be fronted and formed by two vocalists. I love LindaMar, so naturally I became a fan of this quickly.

The opening track “Undertow” is unfortunately not a Tool cover, but it holds its own. Dreary chords under an angst-ridden declaration of being “pulled under the tides”. While the lyrics aren’t anything special, I do enjoy the vocalist’s intensity, especially in the last quarter of the song. Another Life has the variation I look for when it comes to EP’s; aggression (Undertow), to almost ballads like on “Aeviternal”. Well done, gentlemen!

Christian Blakeli and Nikko Vincent look like those guys who would eventually go on to form a comedy duo and YouTube, but their post-hardcore tunage on Another Life is definitely a great start

Pick up a copy on iTunes here.

Recommended Tracks – ”Undertow” and “Time Froze and You Set the Fire”