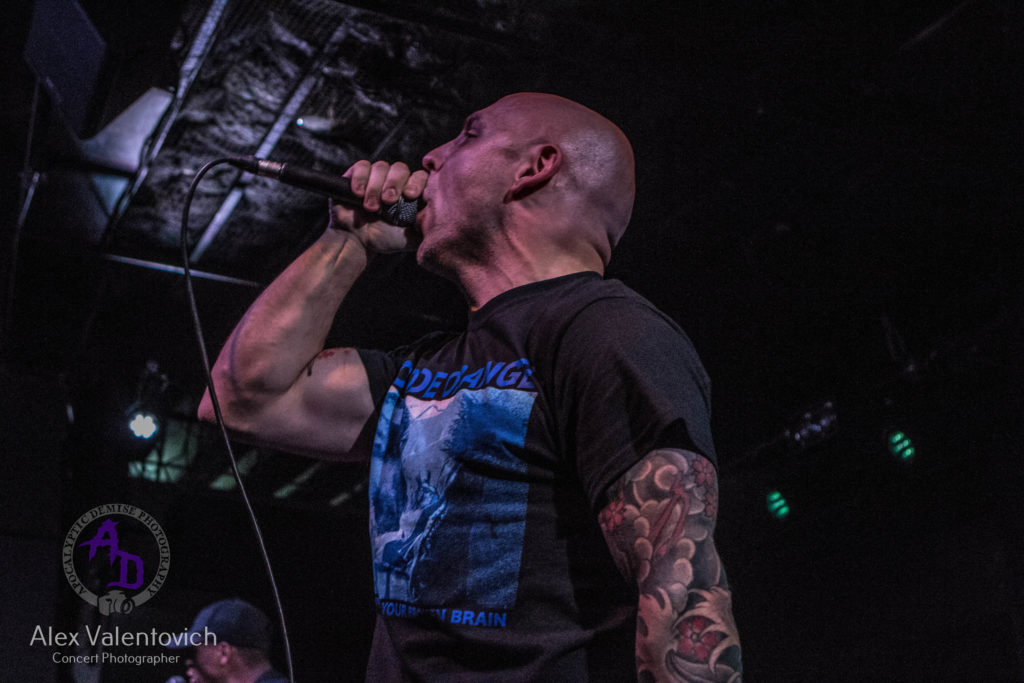 While there’s sadly a plethora of formerly interesting bands now attempting to appeal to the lowest common denominator via lazy songwriting and lack of inspiration, there’s plenty of exciting acts that are rising from their local scenes to tour with known quantities. Some, like Knocked Loose, seemingly did so overnight – while others, like Code Orange, took more of a slow burning route to get nominated for Grammy awards.

No matter which way you slice it, if you’re a fan of hardcore, metalcore, grindcore, or really any heavy music subgenre, there’s plenty of exciting acts coming around. On this first edition of Notes From Underground, we’re bringing you the best the underground has to offer. Strap yourselves in and discover something new today.

Thirty Night Of Violence (To Die In Your Portrait)

I’m simply not going to mince words here. The guitar break at the 1:42 mark of “Apathy In Greyscale” is one of the biggest metallic hardcore calls to arms that you’ll hear, presenting a moment that is likely to translate very well into the live setting. Strongly reminscent of Until The Ink Runs Out // Vanity-era Eighteen Visions, the song’s frantic drumming and pace is a certain highlight of this debut EP, which honestly sounds more like the work of an established act. The short songs and runtime work in the band’s favor, as it simply wants you leaving more.

One of the fastest-rising hardcore/metalcore (whatever you want to label them as) bands in recent memory, Oldham County’s Knocked Loose fit on a variety of tours, from their current direct support to Beartooth, to headlining their own tours and bringing along other notable underground acts. Knocked Loose is helping to make heavy music a good time, once again.

Left Behind is essentially Crowbar-influenced sludgy hardcore with lots of metal influence, too. Vocalist Zachary Hatfield simply makes you feel every word he says, and tracks like “Tough Love” and “Scarred Soul” maintain an emotional and lyrical depth that is captivating – of course, when the riffs aren’t bludgeoning you in the face.

Jesus Piece (Only Self)

The Philly hardcore scene is more promising than ever, and the new Jesus Piece record, Only Self, is proof of that. Consider this your warning – tracks like “Neuroprison” and the death metal-leaning “Dog No Longer” simply command your attention.

Not too long ago, Code Orange was playing basement shows to anyone who’d listen. Fast forward 5+ years, and they’re getting nominated for a Grammy award and having Corey Taylor join them on “The Hunt”. Persistence pays off. Their rules, their way.

Turnstile takes the groove of mid-90’s post-hardcore and the catchiness of punk rock, and turns it into something that can’t really be duplicated. Fun as hell.

Errorzone is simply one of the most blistering records of 2018. Putting this record next to some of the greats of the underground, like Converge and Botch, isn’t far-fetched – and the way the Boston metalcore outfit incorporates nu-metal and industrial touches on “Doomtech” and “Demise Automation” is awfully impressive. Vein may well have started a revolution here.

Another vicious Tennessee heavy band, 2017’s Sounds Of Loss creates vicious, hardcore-influenced metal with some impressive drumming on tracks like “Panic”. The song is probably the best track here, along with guitar riffs that hit like a freight train.

Holy Roar Records, as you will see on this feature, are pumping out intriguing bands seemingly every single day. Conjurer, on just their debut full-length, manage to meld post-metal, sludge metal, and even some post-black metal into a vicious and interesting concoction that never really gets stale.

Another post-black metal band, you say? The Danish outfit really deliver here, and while the vocals may take some getting used to, the young band is moving the genre into potentially very interesting directions. It’s also not a slog to get through, clocking in at around 40 minutes. “Storm” is probably the best track here.

Melting Sun needs a follow-up, and pronto. Top tier melodic post-black metal fropm Lantlos, except without the harshness of their previous works .neon and Agape.

Sanction (The Infringement Of God’s Plan)

Sanction riffs. That’s all there is to it.

Vatican (Spawn Of All Pain Taken)

Do you like riffs? What about golden age metalcore? How about groove metal, a la Lamb Of God? If you answered yes to any of these, the new Vatican EP is for you.

Slow Crush’s debut album Aurora is sorta like candy for fans of what we’ll call “heavy shoegaze”, but it also has way more substance than that. For starters, there’s plenty of standout tracks, and the entire record doesn’t run on like one overlong song. Secondly, the album was mastered by Jack Shirley (Deafheaven, Gouge Away, King Woman), so the record has a sharp, thick tone that his records are often known for. What a debut.

One of hardcore’s most promising young bands, Year Of The Knife have already managed to tour with the likes of Knocked Loose and Terror. Their newest EP, First State Aggression, is probably their most complete body of work to date.

This is what we think of Chamber. Yet another solid metallic hardcore band that’s tapped to do bigger things in the very near future. Pay attention.

Trail Of Lies deal in heavy hardcore with metal influence that delivers pummeling riffs, and distinct vocals that are really solid. “Master Of My Destiny” and “Run” bring more of a thrashy hardcore vibe to the table to keep things fresh.

This South Florida thrashy hardcore outfit would’ve been playing shows with Earth Crisis and Strife in the mid-90’s, that’s for sure. A short but sweet EP with a great message behind it, too.

Portrayal Of Guilt (Let Pain Be Your Guide)

Portrayal Of Guilt’s debut full-length is over almost before it even begins, but that’s really the only gripe here. It’s awfully difficult to label this record – black metal, screamo, post-hardcore, and post-metal tags all might apply – but Let Pain Be Your Guide is an interesting concoction of all these genres to create something very intriguing. You really get the feeling this band is only just getting started.

Ghost Key (See This Through)

See This Through, which just released today, carries on Ghost Key’s distinct and memorable brand of melodic hardcore. The band’s new record is some of their best work yet, especially taking risks on the emotional and somber “Heart Support”, and the Modern Life Is War & Dead Swans-influenced “Hang”.

Kaonashi (Why Did You Do It?)

This EP doesn’t drop until November 23rd, but Kaonashi have been the talk of the scene for a little while now. Self-described as “emo mathcore”, the lyrically-driven band doesn’t fall too far from that descriptor. Without any label support, too – what they’re doing is impressive.

Florida noise rock/hardcore band Gouge Away have emerged as one of the scene’s more interesting bands as of late, cutting their teeth in the local scene as well as tours with the likes of Touche Amore. On Burnt Sugar, the band’s 2nd LP, the band manages to stand out via vocalist Christina Michelle’s improving and developing vocals. Short, but high quality.

Does a new band with members of Sea + Air, Dillinger Escape Plan, and criminally underrated metal band Extol sound great to you? It should, especially if you are really into Oathbreaker’s more recent output. Eleni Zafiriadou proves highly capable of becoming your new favorite vocalist.