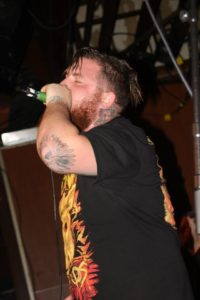 Q – You’re currently on the second half of your tour supporting Four Year Strong and Comeback Kid, how has it been treating you so far?

Nick – It’s been amazing. If you would have told me ten years ago that we’d be touring with Comeback Kid and Four Year Strong, I probably would have told you to fuck off. It’s been nothing short of amazing, both bands, and Expire, and Handguns, everyone has been great on the tour and having a blast. The shows have been awesome, and it’s been great to be a part of this tour.

Q – You released “Dulce” back on June 17th, how has the reception for it been so far?

Nick – I’ve heard some people like it, some don’t, and with some it’s a record that sort of grows on them. We did a lot of things differently, we weren’t afraid to stray away from what we were originally doing. I mean, I’m happy with it. There’s something different on there for everybody, and I think it’s been great, it’s really helped us out a lot.

Q – You released the album through Pure Noise Records. How has it been for you personally to work with them on the album after signing on nearly two years ago?

Nick – We love being on Pure Noise, they’ve been doing an amazing job. ‘Dulce’ was our first Pure Noise release, and we plan on sticking around for a while. Pure Noise is killing it in the game, they have a lot of records coming out this year that are going to be killer. New Senses Fail, new Hit The Lights, new The Story So Far, new Four Year Strong. It’s going to be a good year.

Q – You had Kyle Black back (Hit The Lights/Forever Came Calling/Strung Out) on to produce the album after also producing your self titled. How was it having him back out to work on the album with?

Nick – Oh man, we love Kyle, It’s a little different now because we’re friends with Kyle, we’ll call him up and bullshit with him, just regular stuff. But that’s kind of rough now when you’re in the studio, you’re friends but you still have to bust ass and be serious. But it’s been great.

Q – Can you talk to us a little about the lyrical side to the album?

Nick – It’s all real personal stuff for me, I don’t sugarcoat anything, it’s all a huge outlet for me to get things out of my head and in explain myself, I guess you could say.

Q – You released a music video for the song “Hellbound” a week ago. What was the initial idea behind shooting it?

Nick – There wasn’t anything, really. Brad Wiseman, our booking agent said “Hey, get some random footage of you just singing, I’m just going to do this real simple video.”. It had like a real 90’s vibe, there’s not much too it, it’s just me singing out, We filmed out on our friend’s reservation in Arizona, he added some stuff and put it together. I’m happy with it, I think it’s cool. I know it’s a little weird, everything’s been done. I had a great time.

Nick – That would be Poison The Well, Clutch and Deftones in San Jose, I was 16. Clutch sucked, sorry(laughs), they were so boring.

Nick – “Joy Ride” by Transit was awesome, the new Have Mercy record was great, the new Vanna was great as well. Taking Back Sunday’s “Happiness Is” is amazing too. Those are definitely some of my favorites.

Q – Is there anything coming out this year you’re excited for?

Nick – I’m not really sure on everything that’s coming out. Of course I’m stoked for all of the Pure Noise releases, and hopefully we can release something as well. I believe there is a new Deftones record coming out so that’ll be sweet, the new Senses Fail as well.

Q – Coming up, what’s next for Heart To Heart after this tour finishes up?

Nick – Not to sure at the moment, still working on that. We’re trying to get on some tours, hopefully some more studio time. Oh and after this tour I start training to become a pro wrestler, so I’ll be working on that for a little while, focusing on it. I’m still doing music of course, but I think I’ve got a shot at winning the title(laughs).

Q – And how long have you been wrestling?

Nick – I haven’t, just backyard stuff(laughs). I’m a huge fan, and I’m ready to hop in there and probably get my ass kicked. Nick Zoppo, coming to a ring near you. To a ring..for a ring..? ,, You get the idea.

Q – Thanks for taking the time to talk with us, any last words for fans of Heart To Heart?