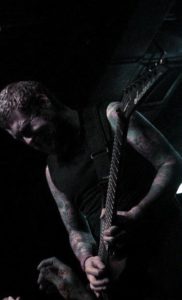 I recently caught up with Dave Davidson, guitarist/vocalist for Revocation. We talked about the band’s new album, favorite music releases, touring and more. Revocation released their fifth full length album entitled, ‘Deathless’ through Metal Blade Records, you can pick it up now.
–

Q – You’re currently a week into your tour supporting The Contortionist, how has it been treating you so far?

Dave – So far it’s been really cool. This is definitely a very progressive tour, so it’s cool to play some of our more proggy stuff live. We’re playing ‘Witch Trials’ from the new record, which has been going over really well, we’ve been closing with that. We’ve been playing ‘Labyrinth Of Eyes’ which has some proggy elements in it, I guess you could say. It’s just given us a chance to play some different material from the new record, and to play in front a different type of crowd.

Q – Do you personally prefer playing on more eclectic lineups, as apposed to doing tours where all of the bands sound similar?

Dave – It really depends, I think so much of it comes down to the dudes, the whole vibe of the tour package. We’ve been fortunate enough to where we basically get along with everyone we’ve toured with. So far we’re only a week in, but the vibes for this tour have been super good. It is nice doing a diverse lineup where everyone brings something a little bit different to the table, but at the same time the whole tour package still makes sense.

Q -Your latest album ‘Deathless’ has been out for around four months now, how has the overall reception for it been so far?

Dave – The reception for it has been extremely positive, all the reviews I’ve read were awesome. We made it on to a ton of end of the year lists, a lot of them put it as their number one album, which is a great honor to see that. Whether it’s a critic, a fan, or even people who had never heard of us before, as it’s brought in a lot of new fans for us. It’s been great.

Q – ‘Deathless’ actually hit #124 on the Billboard top 200. Did that surprise you at all, or were you expecting the album to do really well?

Dave – I guess you can never really know in this day and age, with the way the record industry is. Our fans are really supportive of us, and I think we definitely thought it was going to do better than the last record, but we ended up jumping up by like thirty slots on the billboard, which is obviously great to see.

Q – ‘Deathless’ was also your first release since signing with Metal Blade Records, how has it been for you working with them so far?

Dave – It’s been awesome, everyone at the label is very into the band. and they really threw their weight behind the record I feel. We had a blast on Relapse, but it’s nice to work with a new team, get some fresh blood in there and see how far you can take the next one.

Q – You guys record a cover of Morbid Angel’s ‘Sworn To The Black’ for the deluxe edition of the album, how did it come down to picking that song?

Dave – I’ve always wanted to cover that song, I grew up with that ‘Covenant’ record, and it’s always just been a song that’s stuck out to me on there. The whole kind of vibe to the song, obviously Morbid Angel have a very occult nature to their lyrics, but in a way I also think it’s just about being in a metal band, being sworn to this counter cultural lifestyle. It just sort of seemed to make since given that ‘Deathless’ is about being on the road, giving your life to the band, that sort of thing. I just thought ‘Sworn To The Black’ made sense.

Q – I know you guys covered ‘Dyer’s Eve’ for the last record Is that something you’ve always enjoyed doing, covering songs?

Dave – Yeah, it’s a fun challenge. ‘Sworn To The Black’ was particularly challenging cause Trey has such an unorthodox style, trying to learn his solo and that weird tapping part in the middle provided a challenge. But I think I put my own spin on it, but at the same time try to stay as true as possible to the vibe and the feeling of what he layed down.

Q – Do you remember the first song you ever learned how to play?

Dave – Aerosmith’s ‘Walk This Way’. First metal song was probably like ‘Enter Sandman’, or something like that.

Q – You recently did a video with Nick Schendzielos from Job For A Cowboy entitled ‘Newborns’. Can you explain the idea behind the video a little?

Dave – (laughs) Nick is a good buddy of mine, we were coming through Denver and he just hit me up and said “Hey, I got this weird baby mask, do you want to throw it on and play some random stuff, and I’ll just edit it into this weird Tim & Eric-like video?”, and I was just like yeah, sure. He had put out a couple videos before where he was dressed like a clown, another where he was like Osama Bin Laden meets The Terminator. He just has all these weird ideas and wanted me to be a part of it. We were at the artist’s studio who makes those masks, I put the mask on and played some random funky licks, and Nick edited it all together and threw some wacky bass lines over it. Nick just did it for fun, just sort of a goof to make us laugh. It’s always that thing where you never expect it to do anything, and it just becomes this crazy viral thing. It got so many different shares, and Comedy Central put it on one of their shows. I definitely wasn’t expect the reaction, it was more of just a goof, we were just bored one day while we were on tour. Sometimes things like that just catch on for whatever reason.

Q – What was the whole bit with Comedy Central?

Dave – I have no idea. I forget what website put it up I think Comedy Central saw it was some buzz feed type website, I think it was called The Bustle, or something? Just a website for random internet things, news articles and such. But I guess they got it off of that and did a whole bit around it on a show. I don’t know how they found it (laughs), it might have just been randomly through the internet.

Q – It’s been fifteen years since you, Phil Dubois and Anthony Buda started Cryptic Warning, which later evolved into Revocation. Has it crossed your mind at all, and if so does it feel weird to think about?

Dave – Has it been fifteen years already?(laughs) It definitely was a while ago, but it doesn’t really cross my mind. We’re always doing new things, new projects that keep your mind preoccupied. It’s interesting to think back to where we cam from to where we’re at now, We’ve done a lot of really cool things over the years, touring, put out records, signing to two different record labels, so it’s crazy that that was sort of the genesis of this.

Q – What is the best concert you’ve ever attended that you did not play?

Dave – It’s so hard to say, that’s tough. Seeing Gorguts live was awesome for me, seeing Martyr was really cool, seeing Pantera back in the day was awesome. It’s so hard to say because each concert I went too that I was digging just really had it’s own vibe. But if I had to pick one that was sort of life changing, it would probably be seeing Pantera when I was a young kid, it was this sort of indoor stadium. They crushed so hard, and I was just like oh my god, I need to do this with my life (laughs).

Dave – Thantithaxath’s ‘Sacred White Noise’ is my favorite record from 2014, they’re like an anonymous, weird black metal band from Canada. Musically they’re next level shit, it’s really cool. I really like the new Morbus Chron record, the new Artificial Brain is awesome. There was a bunch of awesome releases hat came out, I really like this EP a band called Voice Coils put out, it’s called ‘In Sixths’, it’s really beautiful music, but weird.

Q – Anything coming out you’re excited for?

Dave – I really only sort of hear about things as they’re approaching release, but i think I heard Gorguts are working on some new material, but I don’t know if it’s coming out this year. I know Voivod just out out a new song and it’s fucking amazing, but I don’t know if it’s just a single or if it will be part of something bigger. Oh and the new Napalm Death, I know it’s already out but it’s awesome.

Q – After this tour is finished, what’s next for Revocation?

Dave – Not really a whole lot, we’re kinda just laying low. We’re doing a couple headliners in the New England area, we’re gonna play Boston and I think New York city for a festival. But I think we’re going to lay low for the spring and hit it hard during the summer. We’ve just done so much touring off this record, we were out for four months straight starting in September. So just laying low, maybe try writing some music, I don’t like to sit still for too long.

Q – Thanks for taking the time to talk with us, is there any last words for fans and supporters of Revocation?

Dave – Just pick up ‘Deathless’ if you haven’t checked it out yet, we spent a lot of time on it and we’re super proud of it. Come out and see us at a show, we’ve got about two weeks left of this run, and more to come.