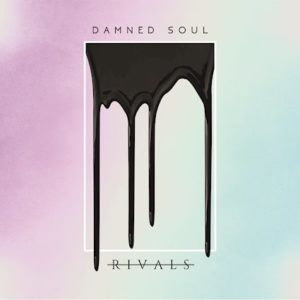 We recently got a chance to review the upcoming album, Damned Soul, from the dark pop-rock trio RIVALS; and it’s an album you’ll have stuck in your head for sure. Every song on this album is heavy-hitting, with Kalie Wolfe’s powerhouse vocals, and the band’s raw and unique sound, you can’t go wrong with these songs. The album comes out on February 2nd via Smartpunk Records, which you can pre-order here if you haven’t already.

Starting off the album is “Over It” which was released as a single in mid-January. The song starts off slow then runs into a full-blown instrumental followed by Wolfe’s deeper vocals escalating between highs and lows throughout. Lyrically, the song speaks of heartbreak and regret which are among some common themes throughout the songs that follow.

“Low” is next, which was the band’s debut single released back in November 2017. Personally, I think the song is super relatable for those who feel they need a “pick me up” in life, as lyrically this song imposes the need for an escape.

“Damned Soul” is a personal favorite of mine. The chorus gets me every time lyrically, with the intro to the chorus saying “As if my damned soul didn’t hurt enough, as if my whole world didn’t fall to dust.” With Wolfe’s unique and raspy vocals, mixed with the electronic-rock instrumental, this is one of the most solid tracks on the album in my opinion.

“Gunslinger” follows which is my most favorite off of the album. Lyrically and instrumentally it blows me away, I always jam out to this song in the car. You can feel the emotions throughout the song which adds to the depth of it. The song’s lyrical composure talks about the broken generation “trying to survive” which I think accurately depicts today’s youth.

“Moonlit” was originally released as a single in December 2017. A personal favorite of Wolfe’s, she comments stating, “Moonlit was written about myself, it was a super dark time in my life, I was full of self doubt and self hate. It was a way to kinda remind myself that its okay to feel bad sometimes. It’s one of the darkest songs on the album for me.”

“Wild Things” instrumentally is lighter overall than the other songs on the album, but doesn’t shy away lyrically talking about imagining the future without doing what you love, specifically in the lyrics “Imagine this, being 21 and giving up on everything that you’ve ever done.” I know I’d go crazy if I wasn’t doing what I’m passionate about a few years from now.

“Misery Memory” reminds me of all of the quotes you see online telling you to let go of your past, and cast your fears and worries away. Lyrically the song talks about focusing on the now and the future, the positive and what you can change, not what you can’t. Instrumentally it’s a cross between smooth guitar riffs and a drum pattern similar to their later song, “Keep Going.”

“Reflection” is one of the most energetic songs on the album. Wolfe comments saying “It’s about around the same time as “Moonlit” was written, the people I was associating with were not helping, it was making me even more depressed, so its kinda about my way of talking about them.” With the lyrics relating back to episodes of paranoia and turning the tables to promote self-love, “The last piece of my heart I have saved for myself.” I believe it’s a message everyone, including myself, should take into consideration that we might not show ourselves enough love as we do to other people.

“Keep Going” reminds me of “Low” vocally but lyrically it could be seen as a prequel to the final song “To: Leila.” Speaking of pushing on when you want to give up, a message we all need reminding of sometimes that when we want to give up there’s something out there we didn’t see coming yet.

“To:Leila” is the closing song of the album, filled with emotion and power not only vocally but instrumentally, it’s the most personal according to Wolfe. Wolfe states, “Its an open note letter to my niece Leila, my sister didn’t think she was able to have kids and when I found out it just kinda changed my world. I wanted to write a song telling her that life is hard, but it’s worth it and it’s my little ‘I love you’ to her. She means a lot to me.” I believe the song could be a personal reminder to us all, that life is hard but worth it.

Overall the album is astonishing and truly blew me away, each song is crafted perfectly to fit the band’s intentions and holds positive messages that everyone can take away from. Definitely a way to go into 2018 with a release as good as this. You can catch RIVALS on tour this spring here!