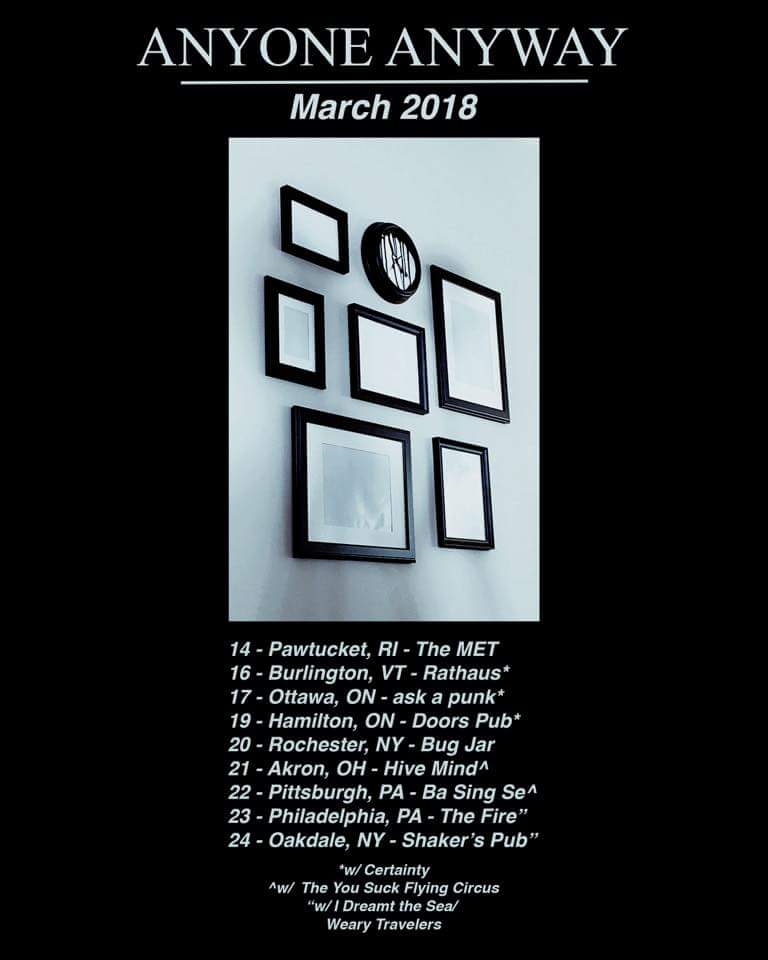 We’re excited to be teaming up with Providence, Rhode Island post-hardcore/alt-rock band Anyone Anyway for the premiere of their new song, “Wanderer, part II”. The band is also embarking on a 9-date tour through the Northeast USA, the dates of which you can find below. The song is the first new material from the band since their 2016 EP, Unloving, and can be streamed below via the fantastic people at Dreambound. Having played with a number of highly relevant bands like Ghost Key, Capsize, and Prawn, Anyone Anyway look to join these esteemed acts by touring heavily and making friends along the way.

Anyone Anyway is an Alternative/Emo Rock band with touches of Post-Rock and Post-Hardcore from Rhode Island. Mainly influenced by bands like Thrice, and Microwave, they bring out an interesting mix of emotion, heavy sounding guitars, and catchy vocals in their songs. On top of that mix, their energetic live shows match the emotion and passion behind every song, leaving viewers and listeners alike to be in touch with their feelings. Over the past few years, Anyone Anyway has played with a slew of national touring acts like Into It. Over It. (Triple Crown Records), The Hotelier (Tiny Engines), and Prawn (Topshelf Records), to Memphis May Fire (Rise Records), Capsize (Equal Vision Records), and Ghost Key (In Vogue Records). With about three years of playing local shows under their belts, the group is feeling ready to turn up the heat and book a week long tour starting in their hometown; Providence, RI.

Before 2018, Anyone Anyway had released two EP’s titled “Loving” and “Unloving” in late 2015 and mid 2016, respectively, with the help of Clinton Lisboa of Half Hearted Hero who produced, mixed, and mastered everything at Soundbox Recording in New Bedford, MA. Both EP’s were put out with help of Super Moon Records from Wareham, MA and are available digitally on all imaginable platforms.