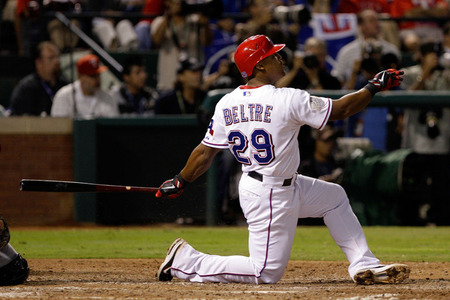 After 21 storied seasons in the big leagues, Texas Rangers third baseman Adrian Beltre has called it a day. Debuting in 1998 at the young age of 19 with the Los Angeles Dodgers, Beltre also played in Seattle, Boston, and finished his career in Texas with tremendous accolades that most will never reach. 477 home runs (3rd all-time), elite defense at the hot corner, 5 top-7 MVP seasons, and a number of other statistics that boggle the mind. Combine that with the person Adrian Beltre was – a reputation for toughness and a strong clubhouse presence – and you have a very easy case for the Baseball Hall Of Fame.

As far as we’re concerned, Beltre’s inclusion into the Baseball HOF is a foregone conclusion. The only question is, is Beltre a first-ballot Hall Of Famer? We think so. Here’s why…

*Beltre had 8 top 15 MVP finishes, including #2 and #3 seasons in 2004/2012. Both years, he finished behind guys like Barry Bonds, Miguel Cabrera, and Mike Trout. Perhaps you’ve heard of them. Also, only Brooks Robinson recorded more games at the hot corner than than Beltre’s 2,759.

*Beltre is one of 4 players to hit for the cycle 3 times in his career. He also holds the record for most career hits by a Latin American-born player.

*His final career slash line of .286/.339/.480/.819 may not look super amazing on paper, until you consider that much of his prime years were spent in pitcher friendly parks in LA and most distinctly, Seattle. Once he played the last 8 years of his career in the bandbox known as Arlington, his batting numbers picked up – including his 2012 season where he record a #3 AL MVP finish, and a .921 OPS.

In summary, there’s very few cases one can make for Beltre not gaining entry to the Baseball HOF in 5 years. Perhaps the fact that he didn’t reach the 500 home run mark, or that he only made 4 All Star Games and didn’t win an MVP might hurt slightly, but Adrian’s case is essentially watertight. Easily a top 8 player at the hot corner, likely top 5, and maybe even top 3, depending on your rankings. Beltre was a revered teammate, a consummate professional, and simply a joy to watch. One of the best third basemen of all time, the choice is clear. Beltre is a surefire HOFer, and is likely to be a first-ballot one as well. Anything else, well, would be criminal.