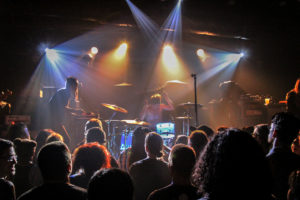 We recently had the chance to sit down with vocalist/guitarist Alex Estrada of Los Angeles based Silver Snakes. We talked about the band’s latest full length, 90’s influences, touring and more. Silver Snakes are currently out on tour with Letlive, Seahaven and Night Verses, which will wrap up in CA on July 31st. You can check out the interview after the jump.
–

Q – You guys are currently out on tour with Letlive, Seahaven and Night Verses, how has it been treating you so far?

Alex – It’s been good, it’s been very different actually. We’ve had a very busy year with touring. The tours we have done this year have been really big ones, they’ve been in these huge venues. We did that tour with Bring Me The Horizon, we did the Coheed And Cambria and Glassjaw tour. We’ve gotten used to playing to three to four thousand people at this point. On this tour we’re kind of going back down to playing for five hundred a night. And we play very differently. We’ve started to notice the changes we’ve made as a band over the last couple months, and how we’ve grown our stage presence. Just the overall confidence of playing in front of an audience, it’s just been cool. This tour has been a learning experience.

TNF – I would assume that a tour in venues such as this would have a more personal and intimate feel for you guys, as well as the fans…

Alex – Definitely, which does have it’s pros and cons. I personally love playing the massive crowds, I like getting lost in the ocean of people. I can focus easier on what I’m doing on stage. With smaller crowds, sometimes i just focus to much on the people right in front of me, and I sort of lose track on the whole mental side of performing (laughs). It’s a learning experience, it’s sort of coming back down from that cloud we’ve been on for the last couple months.

Q – You mentioned being on the Bring Me The Horizon tour, the Coheed And Cambria tour….You guys were recently announced to open the Korn and Breaking Benjamin co-headliner this fall. How is it for you personally to be asked to open for a tour like that?

Alex – It’s awesome. We found out that our name was in the mix for that tour, that Munky from Korn checked us out and liked our record. Those are bands we’ve known of since we were kids. Hearing Jonathon Davis, Munky, Head…you know all those names growing up as a kid in the 90’s. So hearing that they know what we’re doing, that they like it, that they want to take us out on a tour that they’re doing, it’s insane. We’re insanely excited for that tour, it’s going to be huge. It’s probably the biggest thing we’ve ever done. It’s going to be another learning experience, just like I said about this Letlive tour. It’s going to be a whole other ballgame.

Q – On top of that tour, I know you guys have a couple massive festivals coming up. You’re doing Chicago Open-Air with Rammstein, Korn, Slipknot etc, as well as the Aftershock Festival opening for Tool, Slayer, Primus and such. Does it ever feel weird, or surreal to you to see your name on the same fliers with the bands that have had big impacts on your own music?

Alex – The festivals are cool. We’ve been lucky enough enough to really make a connection with the kids that come out to those festivals. They’re really passionate, very driven, just rock music kids. A lot of these festivals are in the Midwest, where i feel like they don’t get a lot of these big tours. So they rely on these festivals. And us being thrown in the mix with that i really cool. Danny Wimer Presents, which promotes a lot of these festivals. They’ve really taken a liking to us, which has been awesome because it’s given us a lot of these opportunities. We’re super thankful for that. But like you said, we’ve got Chicago Open air coming up. That’s with Ministry, Marilyn Manson, bands that I’ve loved forever. Bands that are huge influences on us. Meshuggah, Slipknot, Korn, Rammstein etc, So yes, just to see our names on the posters next to them is surreal. We just did Rock On The Range with At The Drive In and Deftones, and seeing our name next to theirs is a bit unbelievable still for us being such a young band. Playing shows these size, these kinds of crowds are still new to us. But we are v ery excited for those festivals, and we look forward to doing more of them.

Q – You guys released the ‘Saboteur’ full length roughly five months back, how has the overall reception for it been so far?

Alex – It’s been awesome. Every time we do a new record, it sort of gets a new crowd. I don’t think that in the part, we’ve been a band that has a crowd on for a record, and then carries a crowd over to the next record. I think we switch it up from record to record where, i don’t want to say we alienate each audience… but I feel we walk in one direction, then we turn and go down another direction and so forth. So i feel that the natural progression of us diving into the heavier elements of rock music, and the more industrial elements of our own interests, stoner metal and all that sort of stuff. It’s opening us up to different crowds, and in part it’s why we’re doing so well in front of these mainstream audiences. We’ve done festivals like that recently where we’re playing to essentially just metal fans, and our music is translating fairly well to these types of kids. So the record’s response has been great. Every night we have a handful of kids who actually know the record, which is pretty new to us. Cause we’ve never been much of a sing-along band, so starting to see that become a thing has been pretty cool.

Q – I read that you actually self produced the album?

Alex – Yes, it is. I did it all in my studio. Itthen it was mixed by Kurt Ballou from Converge, and then sent to Sweden to be mastered by Magnus from Cult Of Luna.

Q – How was it for you personally to have such a well respected and established group of guys on to help finish the record?

Alex – It’s a dream team, those are the guys we’ve wanted to work with for years. We’ve actually been hitting up Kurt to mix a record with us since our first record, but it never worked out timing wise. But this time around, we heard he had heard our last record. So we hit him up, he said he was definitely interested, but only had a small gap of time available to do it. So we had a deadline on my end to get the record done in my studio. So we hit up Magnus, and we ended up working with a label in Europe called Pelagic, which had a close relationship with him. It was amazing. Cult Of Luna is a huge on our band, and Converge has been an influence on all of us as well. So it was great working with them, I learned a lot from that experience. Even though we weren’t in the same room as them, just getting their direction and input really left an imprint on us all.

Q – What’s the best concert you’ve ever attended, but did not play?

Alex – There’s quite a few… It was a pretty stripped down performance, but I saw Wovenhand play in a book store in L.A a few years ago when he did a release for his lyric book. And Wovenhand, David Edwards is just another big influence on my and my music. So that definitely left a big imprint on me. Seeing that band is like an emotional roller-coaster, any time I’ve seen Wovenhand it’s been a unique experience. Same thing with any time I’ve seen Cult Of Luna. I have a lot of these bucket list shows from my childhood that I won’t ever forget. I was talking about this earlier, but i saw Glassjaw, American Nightmare, Blood Brothers when I was like seventeen years old, I think. Seeing Zao on my nineteenth birthday, Breather Resist definitely one. These Arms Are Snakes as well…. It’s so hard to pick just one, because I took something from each and every one of them.

Q – What are some of your favorite music releases from the last year?

Alex – The past year is tough, I’ve been … It takes me a while to get caught up with music. So right now, I’m still really into the last Marilyn Manson album. ‘The Pale Emperor’ is probably my favorite record of the last three years. The new O’Brother record is really good, those guys are friends of ours. For the most part I’m really stuck in the past with music, there’s so many bands that I’m still exploring from the 80’s and 70’s, so it still feels like new music to me. I didn’t grow up listening to some of the bands that have made a big impact on us now. Like if you asked me now what is a big influence on me, I’d say Depeche Mode, or The Cure. Those are bands i didn’t really grow up with, those are bands that now, as a thirty year old, I’m finally starting to dive into. The band we’re on tour with right now, Night Verses, their record came out yesterday and it’s incredible. It really showcases the same era that we are kind of referencing. Late 90’s early 00’s rock music with a lot of dark elements, but with a really heavy emphasis on rhythm. I was excited to finally hear that record yesterday, and it didn’t disappoint.

Q – Aside from the Korn tour, what is coming up next for Silver Snakes once this tour is finished?

Alex – We don’t have anything set in stone yet after the Korn tour, just sort of talking to a few people. I’m positive we’ll be back out by January. We’re really hoping to line something cool up out in Europe. We have our little wish list we keep forwarding to people. We really want to do a Cult Of Luna tour out there, we want to go out with a band like Baroness, we’d love to do something with O’Brother, with Dillinger Escape Plan. So more than concrete plans, we just have a list of bands we’re just kind of nagging telepathically to give us a call (laughs). So we’ll see what happens, but I think the Korn tour is going to open up a lot of doors for us.