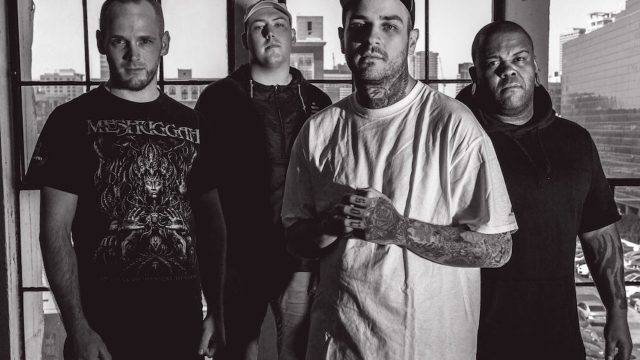 Long one of metal’s more controversial bands, Emmure have certainly experienced a second life recently. Their 2017 album Look At Yourself was perhaps the band’s best effort since their 2006 debut album, with some impressive highlights to be sure. Now, the band is returning with a new record, Hindsight, out next month. They’ve also got a new video for the single “Uncontrollable Descent”, which you can hear below. It follows the release of the album’s previous singles, “Pig’s Ear” and “Gypsy Disco”.

“The label asked me to attach a quote about the new album and this new single so that there can be some words to chew on as this press release goes out. I am not sure what to say. I simply hope the fans enjoy the song as much as we do and look forward to the full album releasing this year. Beyond that, I don’t believe in explaining what the music is supposed to be about. In fact, I consider it creatively bankrupt to rob people of a chance to experience, dissect and create their own unique ownership of what a song potentially represents to them. I want people to hear the music and take away whatever feeling they want. If an artist is outright telling you why a song or album was written, not only do I personally find it pretentious, but they might as well spoon feed you your meals and pick out your clothes for you, since you’re clearly incapable of thinking for yourself. What makes explaining it even worse than what I already mentioned, is that the message within is literally and figuratively already spelled out for you, so if you can’t figure it out or at the very least surmise your own explanation, then you’re better off just reading a dictionary if you’re too lazy discover the meaning in something for yourself.”