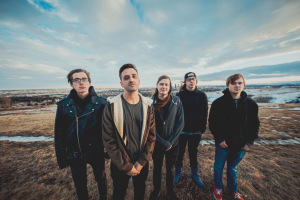 With a band name like Die Another Day, you could be forgiven for thinking this young Canadian band might throw in a James Bond reference or two. And with a song title like “Fear The Future”, you might also think the band is into sci-fi shows like The X-Files. Maybe, maybe not.

Anyhow, what you need to know is this. The band’s new EP, Wild Fire, drops next Friday April 10th – and we’re stoked to bring you a taste of the new EP with “Fear The Future”. The high-energy newcomers draw from many bands on the metalcore and pop-punk spectrum – A Day To Remember, Thrice, and Atreyu are key influences. Spin the new song + video below – we think you’ll dig what the promising young band has going on.

On the new song, the band had this to say:

“We like listening to different genres and trying them out within our songs. They don’t always pan out, but I think we hit the mark with this one! Jared our vocalist challenged me to write lyrics like a nu-metal/ rap song I had written for a previous band, and this was the result. The verse is the right tempo that you could probably even change the style/ instruments used to make it a rap song. Still very aggressive, and hard-hitting from start to finish. The style of chords that were chosen in the verse really express the struggle that we talk about in the lyrics, whereas the more resolved sound and feeling through the chorus really ties it together perfectly. I think I definitely put Jared through hell the first week or so of him having to both learn the words as well as learn how to get enough air to scream them at the same time.” – Tyler Johansen (Bass, vocals)

“We wanted to share with the world our more aggressive hard-hitting side of our music. This is an EP that means the world to us as it touches on so many personal notes as well as being our first full outing as a band so we really wanted to come out swinging with this one. It’s exciting to bring more than a single out to share with everyone; we cannot wait to show you all what months of practicing, writing, and recording is going to look and sound like.”