This month’s metal picks are all over the map, including old-school metalcore, black metal, thrash, progressive metal, and deathcore.  Other highlights include Fit For an Autopsy‘s Lamb of God cover,  a new EP from Illuminate Me, and “Movement” from promising new alternative metal/shoegaze/metalcore duo Love is Noise – featuring a guest spot from Jason Aalon Butler (Fever 333, Pressure Cracks, ex-letlive).

Metalcore newcomers Foreign Hands have released a new single that hearkens back to the early 2000s era of the genre.  In comparison to the straightforward hardcore of Bleed the Dream, their EP released earlier this February, “Chlorine Tears” is both more melodic and massive in scope.  While Bleed the Dream earned Foreign Hands some exposure thanks to an inclusion on Spotify’s New Blood playlist, famed producer Will Putney from Fit For an Autopsy has helped take Foreign Hands to the next level.  The result is an excellent old-school metalcore song that should appeal to fans of groups like Poison the Well or Misery Signals.

Early on, Soulfly mostly blended nu metal and the tribal music that characterized Roots, Max Cavalera’s final album with Sepultura.  The list of collaborators on the first two Soulfly records, including members of Slipknot, Deftones, Limp Bizkit, and Fear Factory, reads like an all-star lineup from nu-metal’s heyday.  Totem, in contrast, evokes Sepultura’s death-thrash roots in both sound and message.  The first four tracks are fast-paced and raw before the groove metal of “The Damage Done” changes things up a little, and the second half contains more variety.

One standout, both lyrically and musically is “Ancestors”.   Written from the perspective of indigenous South Americans during European colonization, “Ancestors” is an incisive criticism of the colonizers’ greed, forced religious conversion and disregard for the natives’ culture.  The guitar riffs and feedback evoke Celtic Frost and early Machine Head.  Another great moment is the closer “Spirit Animal”.  This song is nearly ten minutes long and seamlessly transitions from furious riffage into a chilled out finish with vocals from dub/reggae singer Coyote, who has previously appeared on two Soulfly songs – “Moses” and “Innerspirit”.  Totem pays tribute to Max Cavalera’s days in early Sepultura and makes room for a few new ideas as well.

After a tumultuous few years, Machine Head roared back with a comeback album – for the second time.  After the departure of 50% of the band (drummer Dave McClain and guitarist Phil Demmel), combined with the poorly received Catharsis, Machine Head’s future looked in doubt.  However, Bay Area veteran Robb Flynn made a similar comeback statement before.  The triumphant “Imperium” opened 2003’s Through the Ashes of Empires in the wake of the unsuccessful Supercharger.  Similarly, album ten, Øf Kingdøm and Crøwn, is a resounding return to form.  Machine Head follows a different lyrical approach this time around.  Loosely inspired by Attack on Titan, the album’s concept follows characters named Ares and Eros, two antiheroes on opposing sides.  Robb Flynn noted how, “in that series, there is no ‘good’ or ‘bad’ guy… both sides believe they’re doing the right thing, but both are committing atrocities and evil.”

The sound of Øf Kingdøm and Crøwn ranges from thrashy and aggressive to melodic and emotive – sometimes within the same song.  Opener “Slaughter the Martyr” sets the stage in a dynamic Blackening-style epic.  One of the more melodic tracks, “Unhalløwed” has a mid-2000s Killswitch Engage feel, while “Chøke Øn the Ashes Øf Yøur Hate”, “Kill Thy Enemies” and “Bløødshøt” showcase Machine Head’s early bullish, hard-hitting sound.   “Bløødshøt” in particular sounds like a callback to “Blood for Blood”, the thrashiest track off their 1994 debut Burn My Eyes.  “Arrøws in Wørds Frøm the Sky” is the anthemic, inspirational closer.

As the second album from this Wisconsin-based technical death metal band, Irkalla is a more focused project compared to their debut Perspicacity.  Doom and progressive influences interwoven into the brutality make this one stand out.  Signed to The Artisan Era (the tech-death label started by Inferi guitarist Malcom Pugh), Aronious include the breakneck pace and guitar wizardry of the subgenre while allowing listeners room to breathe as well.  “Ereshkigal” is a prime example of this, including two atmospheric, eerie sections in the midst of a brutal, technical track without losing momentum.

Irkalla opens with “Anakani”, a short instrumental with ominous piano, which leads into the single “Descent of Innana”.  The song and lyric video reference the tale of a goddess in Sumerian mythology – Inanna, the Queen of Heaven, descends to the underworld, is slain, and later resurrected.  This concept is maintained throughout the album – the title Irkalla is the name of the ancient Mesopotamian underworld.  Aronious show to be a name worthy of attention from any technical death metal fan.

Auriferous Flame – The Great Mist Within

Auriferous Flame is a new endeavor from Ayloss, the man behind the solo black metal project Spectral Lore.  While not currently up on Spotify, the album can be streamed and purchased through Bandcamp.  With Spectral Lore, Ayloss established a very ambient, atmospheric take on the genre with lengthy compositions that characterized his most prominent album, III.  He’s also collaborated with Mare Cognitum – a space-themed creation of fellow solo black metal musician Jacob Buczarski – on 2020’s planetary Wanderers: Astrology of the Nine.  In contrast, Auriferous Flame is more traditional and influenced by 90s black metal.  The strongest tracks are the atmospheric “Ancient Corridors” and the layered “Molten Gold”, both stately, nearly 11-minute compositions.  “Ancient Corridors” also flows directly into the closing instrumental “Mass of Ice”, finishing with a respite of calm ambience after the chaos.

Oceano rarely disappoints, and Adam Warren and the boys are back with more massive, brutal deathcore.  This single marks Oceano’s first new music released in five years.  Adam’s signature low growling delivery has remained remarkably consistent throughout his fifteen years with the band.  Memorable lead riffs and a crushing breakdown make “Mass Produced” a winner.  Earlier this year, Adam Warren appeared on a redux of Carnifex’s blackened deathcore staple “Lie to My Face”.  Starting this month, Oceano will also be touring with them, in celebration of the 15th anniversary of Carnifex’s debut album Dead in My Arms.

Becoming the Archetype – Children of the Great Extinction

Longtime Solid State signees Becoming the Archetype return after a ten-year hiatus.  Children of the Great Extinction won’t disappoint the band’s fanbase after the long wait, and also provides a pretty good overview and introduction to newcomers.  The sound simultaneously evokes the early death metal/metalcore of Terminate Damnation and the experimental style of 2011’s Celestial Completion.  The ten new songs are catchy and heavy while maintaining a progressive sensibility throughout.

Overall, Children of the Great Extinction should also strongly appeal to fans of bands like Rivers of Nihil or Fit for an Autopsy, especially the eight minute closer “The Sacrament” and melodic, memorable singles “The Remnant” and “The Lost Colony”.  Once more, the fantastic album cover is designed by Dan Seagrave, who’s also painted iconic album art for The Devil Wears Prada, Suffocation, Entombed and several other metal bands.  The cover shows otherwordly, long-legged creatures roaming the landscape of an alien planet, and captures the album’s science fiction concept perfectly.

Stray From the Path/Jesse Barnett – “Bread and Roses” (Aug 2, punk/hardcore)

A Wake in Providence – “The Horror Ov the Old Gods” (Aug 11, deathcore)

An Abstract Illusion – “In the Heavens Above, You Will Become a Monster” (Aug 15, death metal)

Ether Coven – The Relationship Between the Hammer and the Nail (Aug 5, sludge metal)

In Hearts Wake – Green is the New Black (Aug 5, metalcore)

Cyborg Octopus – Between the Light and Air (Aug 26, progressive metal)

Ghost in the Ruins – Return to Ash (Aug 26, metalcore)

Illuminate Me – Dying on a Hill That Nobody Remembers (Aug 28, metalcore) 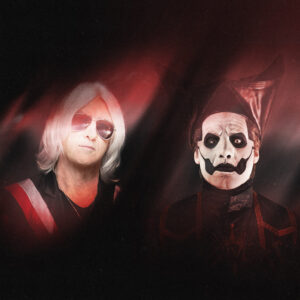 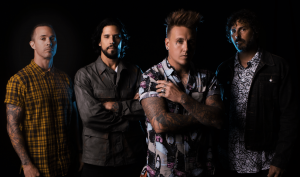