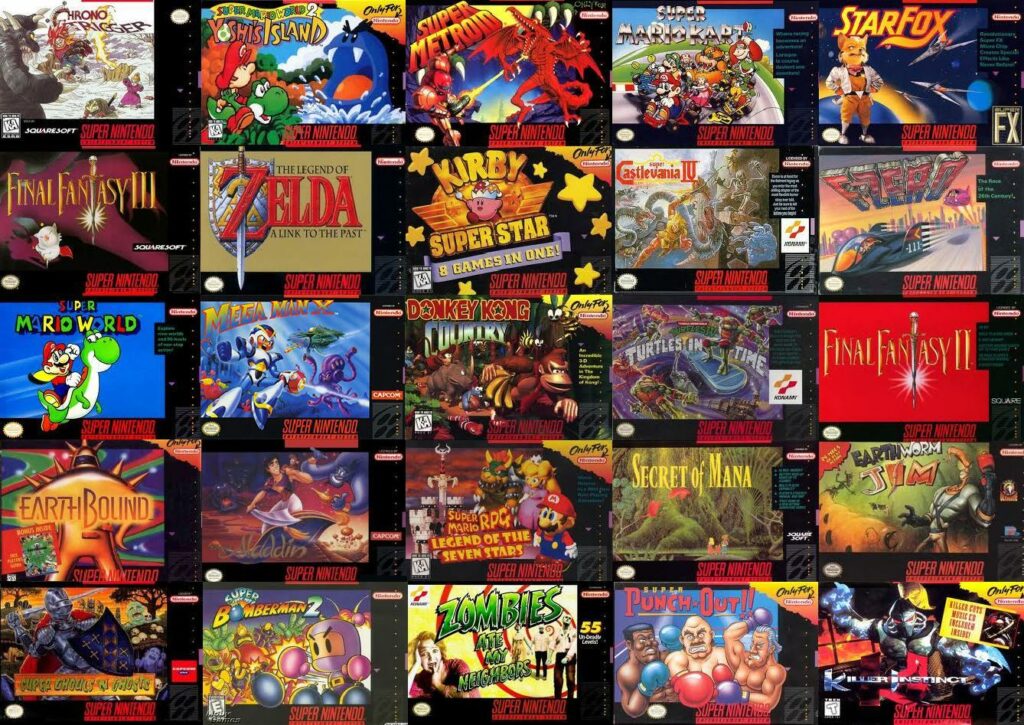 Arriving at a time where video games were becoming less of a supposed “fad” and more of a big-budget pastime with advertising budgets to boot, the Super Nintendo accomplished multiple things for Nintendo. In particular, it was the first big gaming rivalry in the industry (with Sega’s Mega Drive), which fostered huge software and hardware innovations all throughout the industry. The first big console war in gaming, the Super Nintendo also had an innovative controller that would go on to be mimicked.

Graphically, the SNES was obviously a quantum leap over its 8-bit predecessor. It was evident right off the bat with launch title Super Mario World, a serious power boost from Super Mario Bros. 3 just a couple years earlier. One of the most critically-acclaimed games in history, a plethora of new colors and fun gameplay elevated this to become one of the best 2D Mario games in the series. Also, you could ride Yoshi, a green (and multicolored with variants) dinosaur who eventually got his own games. Mindblowing.

The game library, though, is what is often talked about with the Super Nintendo. It’s for good reason, too. New licenses from professional sports leagues (especially the four major pro sports) enabled sports fans to be immersed in some of the most beloved sports games of all time. Tecmo Super Bowl (originally an NES release in 1990, but later released on the SNES), NHL ’94, the first Madden NFL games, and the NBA Jam series all gained widespread popularity on both the SNES and Mega Drive. In fact, Tecmo Super Bowl and NHL ’94 proved so popular that there are still video game tournaments held for both – proving that classic gameplay will always rise above any supposed graphical limitations.

Racing games were a particular highlight on the console, with vastly improved framerates making games like Super Mario Kart and even the Top Gear series look (and play, obviously) fantastic. There was also launch title F-Zero, with its Mode 7 graphical technology making everything go really, really fast.

The console also had one of the biggest RPG libraries of anyone out there. Super Mario RPG, a late addition to the console that was released right as the Nintendo 64 was coming out, was the first Mario game with RPG elements as well as a hilarious story. In fact, that game in particular inspired both the critically acclaimed Paper Mario series, as well as a series of GBA and DS Mario RPG games that still prominently featured platforming elements. Other big RPGs for the system included the cult classic Earthbound, with its quirky humor and setting, as well as some of the best Final Fantasy games out there (IV and VI were particularly great), the iconic Chrono Trigger, and even new series like Star Ocean (the latter truly pushed the limits of the SNES hardware – it’s a huge game). There were also games like Shadowrun, an isometric RPG with non-linear stories that inspired games like the entire Fallout series. More action-oriented RPG games like Secret Of Mana and Terranigma introduced huge stories, and in the case of the former, co-op gameplay that was very rare for the genre at the time.

It was also home to some of the biggest fighting games of the era. You obviously had the Mortal Kombat series, which was neutered (at first) to satisfy Nintendo’s censorship wishes. Super Street Fighter II Turbo is still considered one of the best 2D fighting games of all time, with a huge roster and very balanced gameplay. Killer Instinct helped Rare become a household name in the developer realm, and the hilarious Clayfighter series lampooned and satirized typical fighting games like the above. The gameplay for the latter was also particularly interesting.

Plenty of iconic brands and developers got their starts on the system as well. Before World Of Warcraft made them a license to print money, Blizzard Entertainment cut their teeth on inventive platformers like The Lost Vikings, as well as more action-oriented games like Blackthorne. Fable creator Peter Molyneux got his start on the SNES with Populous, a pioneering influence on the “god game” genre where you could build and manage your own world. Games like this would later find a huge audience on both the PC as well as mobile gaming, with its influence still felt today.

The Super Nintendo also was home to some of the most critically acclaimed games of all time, in many genres. Link To The Past, the SNES Zelda entry, introduced gameplay elements that would be seen in almost every game in the series after (opposite worlds, the Hookshot, etc.), while the Donkey Kong Country series (created by Rare) introduced some beautiful graphics and great platforming gameplay that made Donkey Kong (and Diddy Kong, and his pals later) the hero. Super Metroid introduced the “Metroidvania” gameplay that would be seen in tons of games, especially on handheld and mobile systems. Flight sims like Pilotwings and Star Fox introduced new textures and gameplay elements that would become huge in the years to come.

There’s honestly dozens of games we haven’t touched on here as well. Puzzle games like Tetris Attack are common today, but back then they were particularly innovative as the success of the Game Boy’s Tetris as a launch title was huge. Tetris Attack did things just a bit differently, though. Even movie and cartoon-licensed games like The Lion King and The Magical Quest Starring Mickey Mouse had solid graphics and fun, challenging gameplay that felt like an accomplishment to complete. The three Super Star Wars games also deserve a shout, as they mostly remained faithful to the source material, but took liberties as well and included plenty of action.

Is there a singular “best gaming console”? Not really. Even the greatest gaming consoles in history had their faults, and the SNES is no exception. A failure to embrace a more mature demographic of gamers initially (remember the Mortal Kombat controversy? Same) meant that many of those same gamers would embrace Sega (and later, Sony’s Playstation) as their consoles were A-ok with more violent video games. That’s one of the only real gripes with the SNES, though. With solid technology and hardware backing its god-tier software library, it is a strong contender for the coveted, mythical title of “best gaming console in history”. It was certainly successful – while not quite selling as many consoles as the NES had (due in part to its increased competition throughout its lifespan), it paved the way for many important innovations and game series that we enjoy today.