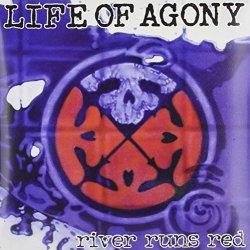 To put it succinctly, Life Of Agony’s River Runs Red, released in 1993, is an alternative metal classic. Released the same year as albums from Quicksand and Type O Negative, River Runs Red managed to easily stand out as an alt metal album that had elements of rock, doom/sludge metal, gothic undertones, infectious riffs, and the iconic vocals of then Keith (now Mina) Caputo. An album this groovy and catchy, yet still steeped in New York hardcore, shouldn’t be overlooked by anyone.

Easily accessible yet still pummeling heavy, River Runs Red is undoubtedly impressive for a debut record. Lyrically, the album veers more towards introspection and dark, yet catchy songs about substance abuse and broken relationships, but does so in a way that’s not cliched. Opener “This Time” strongly recalls contemporaries like Alice In Chains and Crowbar with its sludgy, riff-heavy opening – but the focal point is the highly unique vocals of Caputo. Immediately distinct and more vulnerable than peers, Caputo can do it all. “This Time”, “Through And Through”, and the title track all showcase the hybrid style that LOA helped pioneer here. Leaving out “Underground” would be a mistake as well, as this standout song manages to shift from slow to fast tempos in the blink of an eye.

River Runs Red may a dark and harrowing concept album at its core. Yet, it’s also as infectious and vital as it was upon its 1993 release, and not an album you want to miss out on. Besides, missing out on the catchy riffs of “My Eyes” would be a shame.