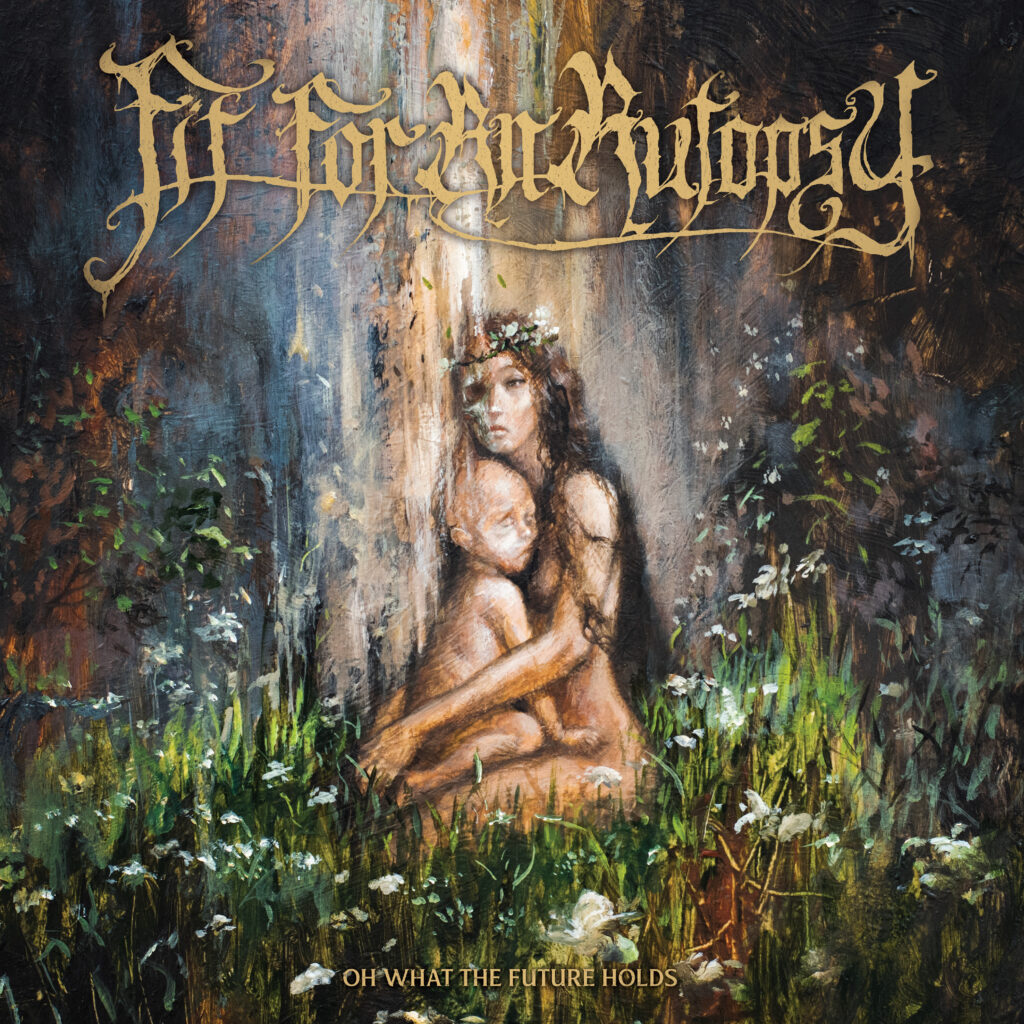 Just like how I can’t understand the cry-babies who sooked over the perfectly fitting, well telegraphed and fine series finale of Dexter: New Blood, I also cannot understand people who label Fit For An Autopsy as exclusively deathcore, especially in their current stage. Neither can the band themselves, it seems, as they now refer to themselves as “post-deathcore.” (Pretentious as fuck but also kinda accurate.) There’s just more going on under their hood than what we’d normally associate with that genre, eschewing some usual stapes of modern deathcore.

At this stage, Fit For An Autopsy blends metallic metalcore with melodic death metal, the occasional deathcore bout, whilst implementing new melodic and dynamic sensibilities. And all of it always sticks. This was true of 2017’s rather solid LP, “The Great Collapse,” very true of their fantastic 2019 album, “The Sea Of Tragic Beasts,” and has now become a universal truth for “Oh What The Future Holds.”

So is “Oh What The Future Holds” the best Fit album? Well, passing over people’s unhealthy tendency to measure things as being the next best thing since the last best thing that a band/author/director/artist put out, then yeah, probably. The way I’ve come to view this band is how I also see Hail The Sun: each new record usurps the throne that the previous album rests upon.

What I’m getting at is that “Oh What The Future Holds” is a masterclass for Fit’s discography. It’s satisfyingly punchy, disgustingly heavy but rarely just for the sake of it, perfectly familiar in writing and tone, utterly huge in scope, and outright unflinching in its aggression. Yet in saying all of that, it’s also never afraid to actually sing, to have choruses, to cultivate atmosphere, or to branch out into quieter, cleaner instrumental lanes. Ideas that always service this record’s larger vibe and theme. It’s this careful tight-rope balancing act that positions FFAA a cut above so many of their peers. Music isn’t a competition, obviously, but we all have limited time. And why would I ever spend my own limited time on this slowly rotting earth listening to this band’s many contemporaries who are mostly just reiterating the same deathcore and death metal stylings but without the same heart, dynamic or tonal variety as Fit? Exactly.

Another key victory that FFAA’s sixth album claims is just how heavy and melodic it is at the same time. Closer The Man That I Was Not is a terrific example of this through-line, both sides working in harmony. This is totally nothing new for the band by now, of course, but it’s all done so tastefully and well-timed that I have no quarrel if it feels very expected. The New Jersey act utilizes these two core opposing timbres, the kind they’ve been exploring for over five years now, and with “Oh What The Future Holds” they practically reach their current zenith.

Both polar opposites shine, but what will undoubtedly pull heads is the sheer power of it all. At times, the indomitable grooves and one-liner breakdowns on this thing sound like they could collapse entire ecosystems. Those things need a fucking license or something, man, I swear. The title track, the album’s opening cut, carves this fact into cold, hard stone with blood-letting moments of rapture-level heaviness, the kind that’s set up by light piano notes and time-keeping hi-hat stomps that act as the calm before the storm.

Beyond the instrumentals, the band’s always well-enunciated vocalist Joe Badolato sounds like he’s challenging the gods themselves with how imposing his vocal performance (and production) is here. His low growls and full-chest bellows all sound like proper war cries caked in sulphur and ash, thirsty for more. His venomous words and how he hatefully spits them, like on Conditional Healing (“All for what? A seat at the table in Hell”) embody this aggression.

This album feels like the end of a trilogy, one that started with “The Great Collapse”, which was then fully realized on “The Sea Of Tragic Beasts,” with FFAA capping it off now with the “Oh What The Future Holds.” Just like those previous two records, this album threads the needle beautifully between the group’s newer-found dynamism and melodicism, as well as their unrelenting brutality and life-ending heaviness. FFAA are at the point now where they could release a double album next – one heavy, one not-heavy – and have them both work in tandem and separate from one another. (Putting this down now so I may come to be seen as some sort of metal Nostradamus one day.)

Pushing both the crisp-as-hell production and surgical-strike precision of the songwriting is the band’s guitarist and engineer, as well as one of their key songwriters, the ever-prolific Will Putney. Without him, this album – hell, this band – just wouldn’t be the same. His know-how behind the boards and his slick riff work alongside Pat Sheridan and Tim Howley is a huge ace for this band’s music.

So too is how the band bleed together micro and macro thematic devices, worldly and personal topics alike. For instance, self-reflection takes centre stage on The Man That I Was Not, a desperate plea to be better and to connect with our fellow humans amidst the debris of a dying world; decrying that “ there will never be a light for the black hearts.” Somewhere in between the two, we get Biblical imagery of gardens and serpents on the fatalistic Collateral Damage, which also has, for my money, the best lead work of any Fit song to date. Two Towers fits the latter personal side, being an abstract concept piece about the drift between someone’s past and future self. Elsewhere, the grinding instrumental cogs and squealing brutal death metal of the heavy as sin “In Shadows” is about you being the beginning and end to your own suffering; an empowering call to face thyself.

Then there are cuts like “Pandora”, starting off with drummer Josean Orta dishing out a land-sliding fill before anchoring everything down with punky blasts, that are squarely about the Earth’s environmental destruction. I reckon the band’s collective favourite DC villain would be Doomsday because that’s what they mostly talk about on their albums: the end of the fucking world. And I hold nothing against them for it: it’s all around us. The Anthropocene is not a new topic for Fit – they’ve talked about this for yonks now; Badolato literally screams on this song, “A world driven by extinction only ends in extinction” – but it’s a track that works well as a crossing-the-Rubicon metaphor. That what you take out of Pandora’s Box, you cannot put back in. That once our planet crosses a certain line, there’s simply no going back for any of us.

More than that, the primal assault of Far From Heaven is a cutthroat, almost-apocalyptic metaphor for class warfare and the institutions that exist above us mere commoners to hold us down, keeping us angry and poor. This song is positing the ruling elite classes as “gods” that ensure we are all locked out of the figurative heavens; ruling demons that only “let the light in to show us that darkness is permanent.” And it’s an effective framing device, one that makes the song hit harder. Eat the rich and hail satan, kids.

It’s telling of how strong this album is that the only criticisms I can offer are just me more or less nitpicking. A Higher Level Of Hate starts off with light hand percussion, feeling like a pre-battle war-drum ceremony as the filthy guitars creep in. Once the shit hits the fan and the song kicks off, it’s a very straightforward Fit For An Autopsy track, but with some fast screamed phrases that make Badolato sorta sound like Oli Fucking Peters. Don’t get me wrong, it’s cool, and probably the heaviest song on offer, but it’s fine at best. I don’t love it like I do certain other songs here. The same can be said of the overly chant-heavy “Savages” that is just aching to be played live, what with the tempos and vocal calls it emits. It’s savage sonically, yes, but it’s ultimately a rather simple and generic Fit song.

As for The Man That I Was Not, much like the excellent Napalm Dreams from their last album, ends on a fade-out. A big no-no in my own books, but one that I can sorta forgive, as the part that it fades out on is decent. However, the band have basically re-done the flow and finale of their last record with this new ten-track full-length, seemingly hoping no one would notice, and I was personally hoping for a last-minute surprise to finish things off on. To really send things out with a bang. Maybe next time? I know the band have it in them. That’s all I can think of critically when it comes to this latest Fit release. That’s how goddamn robust it all is.

Some hacks might end a review of “Oh What The Future Holds” by saying “Where will the band go next? We’ll just have to wait and see what the future holds for them ha ha ha.” Good lord, kill me now. I’m going to end this review by saying that it’s bands like FFAA that deathcore and death metal alike sorely require. Neither me writing this or you reading this will be here for a long time, let alone a good time at the current rate, so let’s endure the unstoppable death spiral towards the end of days with some sick extreme music. With sick records like this.

Tags: 2022 Deathcore doomsday Filthy Fit for an autopsy Heavy As Fuck Huge Metalcore Oh What The Future Holds review The Great Collapse the Sea Of Tragic Beasts will putney 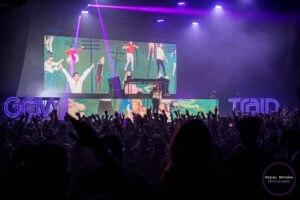 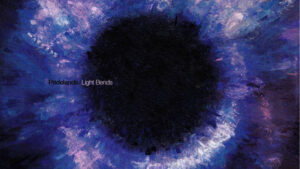 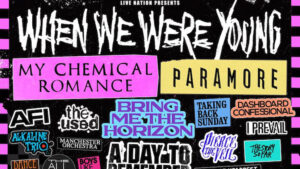 The Killers still aren’t playing it, but Emo Coachella announces a third day of the exact same lineup

Should I be Betting the Maximum Amount in Slots? 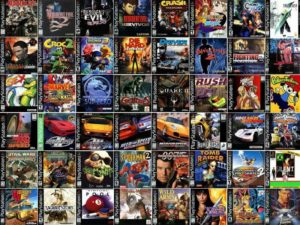 Will Ads Spoil the Potential of Gaming in the Metaverse?