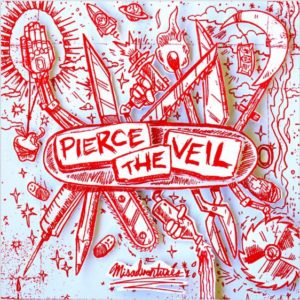 After Pierce The Veil took a year off for songwriting and soul searching, they finally announced a new album “Misadventures” on Thursday, April 7th. If you enjoy Pierce The Veil, then you realize how long of a wait it was for this release. Although, I’m rather glad that they all took their time with this whole process. Rumor has it, Vic Fuentes (lead singer) was going through a rough time with finding himself during the songwriting portion.

I’m personally satisfied that they have worked so hard for their fans. They truly put all of what they have on stage and leave it there. They played on one of the main stages at Vans Warped Tour last year of 2015 which everyone was very eager.

Pierce The Veil has released little sneak peeks into the album by publishing “The Divine Zero” and “Texas Is Forever” onto Youtube. The whole “PTV” fan base has been talking about this ever since they heard the band was taking off for “Misadventures”

The tour is supposed to start Friday, May 13th in Mexico City for a CD Release Show. How exciting! The guys are expected to play their whole entire album from front to back with I The Mighty and Movements. The first tour date officially occurs on Sunday, June 5th of 2016. The tickets have been released online for purchase here: Pierce The Veil

For any further questions concerning the “Misadventures Tour”, visit Pierce The Veil (Tour) for more information. You can also stream a new song, “Texas Is Forever”, below.