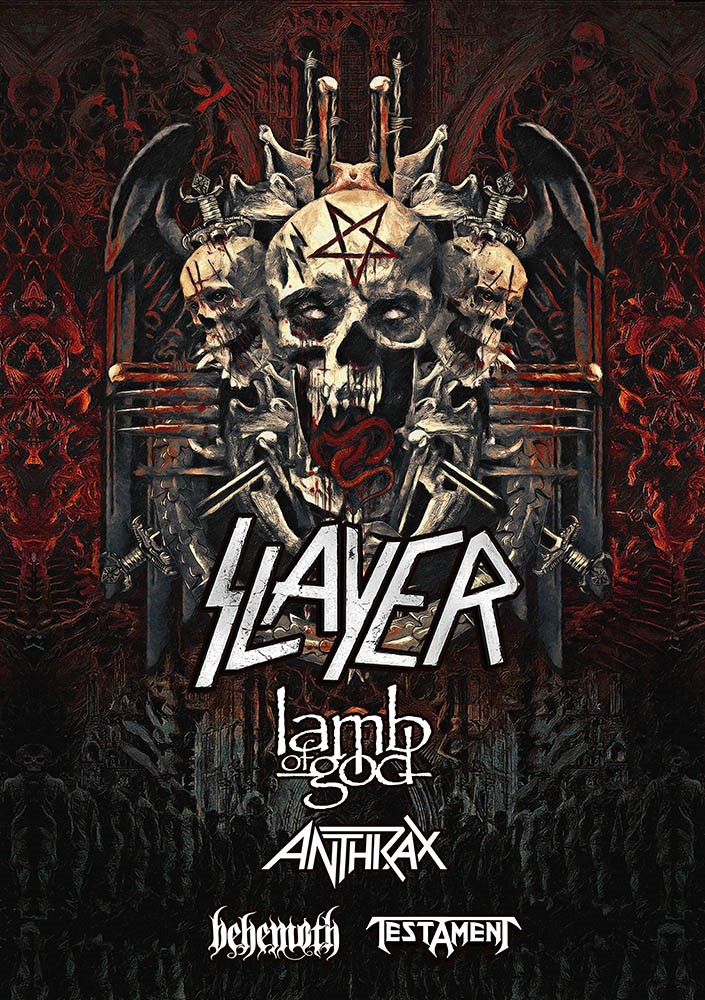 Internationally-renowned heavy rock leaders LAMB OF GOD will support metal legends Slayer on leg one, North America, of what will be Slayer‘s final world tour. The 26-date trek will begin on May 10 and visit several major cities – from San Diego to Toronto, Orlando to Minneapolis. Additional support will come from fellow metal heavyweights Anthrax, Behemoth, and Testament. Tickets go on sale to the public this Friday, January 26.

Randy Blythe of LAMB OF GOD says: “If you are lucky enough to be invited to play even just once with living legends like Slayer, it’s an incredible honor. Slayer gave LAMB OF GOD our very first two overseas shows. Slayer has subsequently taken us on several full-length tours, both at home and abroad. The guys in Slayer and their crew have also always been very, very cool to our band. It is irrefutable that Slayer helped create the genre of aggressive metal, and all modern bands of that ilk owe them a huge debt – I know we do. To be asked to be a part of their final tour – well, it just makes you stop and realize just how lucky you are. Hail Slayer! We’ll see you on the road…”

Dates for Slayer‘s final world tour, leg one, North America, are as follows:

ABOUT LAMB OF GOD:

Richmond, VA natives LAMB OF GOD are one of heavy music’s most successful and uncompromising bands.  When the band’s first major release, New American Gospel, was released in 2000 it was immediately touted as a classic within the genre. AllMusic stated it best, “The essential signatures of post-Pantera metal are in abundance on LAMB OF GOD’s inaugural album. New American Gospel provides a mighty oak upon which gritty American metal’s faith is maintained, effectively bridging the ’90s’ insistence upon drill-sergeant technicality and the old school’s determined focus on riff construction.”