The United States has an astounding extreme metal scene. Black metal, in particular, has quite the variety from around the country and it seems more one man projects and bands are popping up all around. While Florida is particularly known for its root in old school death metal during the 90s, we still see many talented bands come out of the area. The up and coming Florida black metal band Grave Gnosis is the latest act you should be keeping an eye on.

Formerly known as Nahemoth, Grave Gnosis use to be a one man project from Ø (current vocalist and guitarist) located in Tallahassee, Florida. Upon relocating to St. Petersburg, Florida, Ø aimed to turn the project into a full band. Fast forward to the June 2015 and Grave Gnosis releases the debut full-length album “Birthing” with the addition of members NoVa on keys and Vikzaru on Bass. “Birthing” showcased Grave Gnosis’ sound of atmospheric black metal with additional progressive and psychedelic elements topped off with occult themed lyrics. Shortly after the release of “Birthing”, Grave Gnosis began to play locally and build up a fanbase.

Currently, Grave Gnosis’ lineup consists of Ø on guitars and vocals, NoVa on keys, Kur on guitars, Vikzaru on bass, and Ox on drums. In a short time, the band will be doing a US run with New Orleans’ based black metal project Mehenet. The tour dates include:

Make sure to catch this tour and support both Grave Gnosis and Mehenet. Not to mention, its awesome to see them be a part of the Anticosmic Music Fest with quite a few big names on the roster (see below). Overall, make sure to keep an eye on Grave Gnosis. At this pace, they are definitely headed to being a relevant name in the future of US black metal. Stream “Birthing” in its entirety on Bandcamp here. 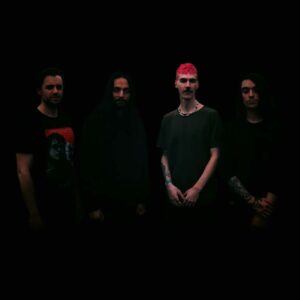 One of metalcore’s most underrated gems, Exanimate, release their new song ‘Bloom’ 100 gecs continue to change the game with “Doritos And Fritos”