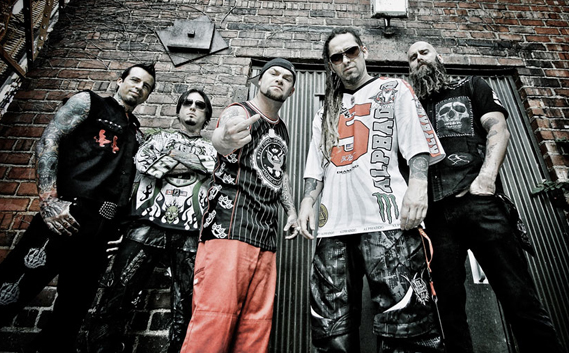 According to multiple Twitter users in attendance for the Five Finger Death Punch concert tonight in Memphis, the band has reportedly broken up without any real warning or prior indication. Below are some caps of the tweets from the concertgoers. This news has yet to be confirmed by the band or their label, so for now this is just a rumor. We will bring you any updates the moment we learn of them. 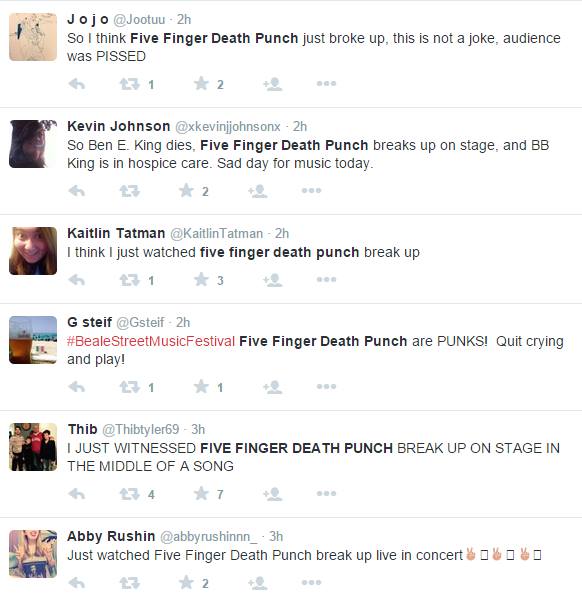 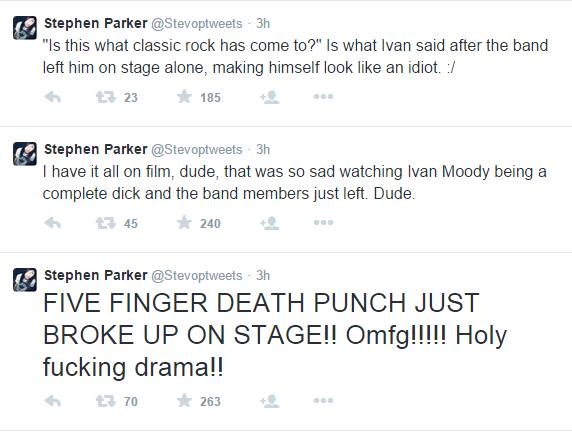 UPDATE ONE: A video has surfaced of the band, reportedly showing everyone but Ivan off stage. Ivan is asking the audience to relax. This is by no means official proof, but it’s not a good sign. View the video below.

UPDATE TWO: Another video (which can be viewed below) has just surfaced, seemingly showing Ivan flipping off drummer Jeremy Spencer. Some people in attendance claimed Spencer couldn’t keep the beat, and that various members of the band left and came back on stage for 15-20 minutes at a time. This happened three times, and it allegedly took them an hour to perform six songs.

UPDATE THREE: Another video has surfaced, showing Ivan thanking Zoltan for everything then throwing the mic away saying “see you later” before walking off stage. The evidence is starting to become damning.

UPDATE FOUR: An eyewitness account of the events via one of our readers, Brian Hatchett.

Ivan held up Jeremy’s book and asked the fans if they had this FFDP book. Then, still mic’d seemingly unknowingly, said “That I had nothing to do with”, directed at Jeremy. Jeremy then threw his sticks and walked off stage, and the band shortly followed. Ivan talked for a minute, threw his mic, and marched off. A few minutes later, Ivan came back, rambled and talked to the fans, and attempted to play around on Jeremy’s drumkit, trying to lead a song rather weakly. Jeremy and the rest of the band came back and played a song while sounding completely out of step with each other, while Ivan stayed really close to Jeremy, seeming to talk shit to him. Everyone left again, Ivan threw the mic again. This routine repeated a couple more times until they just ran out of stage time and walked off stage, not to return. As a whole, looked like Ivan was being a dick.

UPDATE FIVE: Another video account of the meltdown, this one a little longer with more info. The band apparently stormed off stage because of the events detailed in Update #4, and Ivan is trying to salvage being alone on stage by going acapella. It can be viewed below.

UPDATE SIX: The band just released a statement. They are not going anywhere, but a few crew members are apparently getting fired. Ivan is attributing the poorly handled issues to technical difficulties. You can view the post below. The band is not breaking up though. So that’s good news for some. To view the statement on their Facebook page, click here. 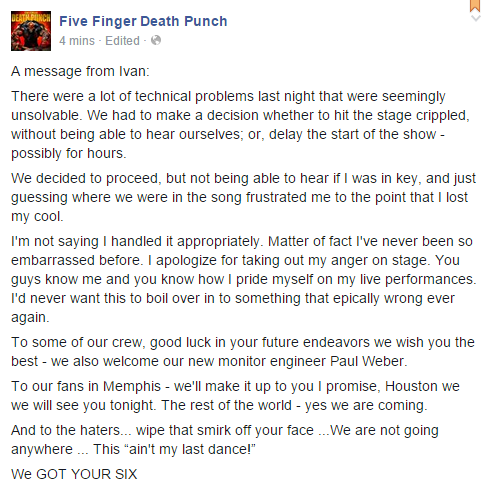