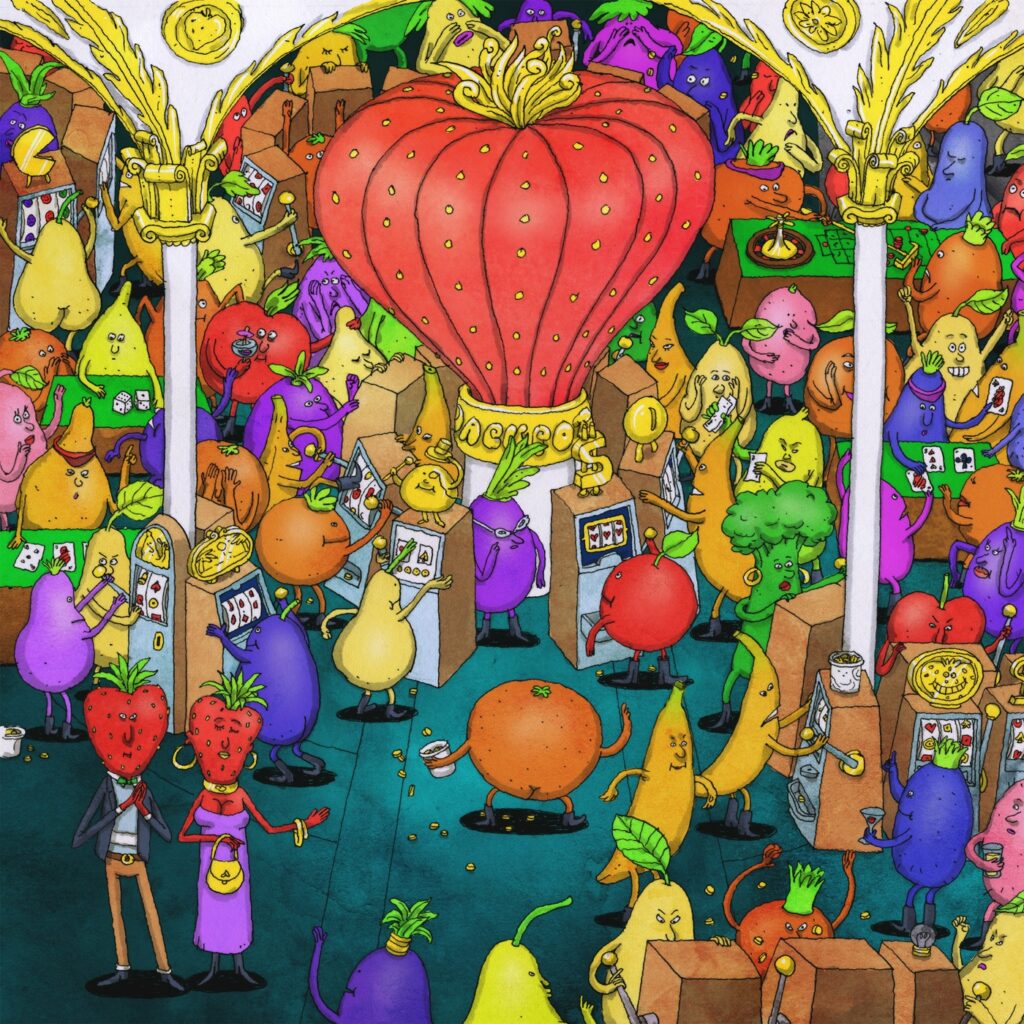 Dance Gavin Dance has gone through some of the worst nightmares a band could possibly endure in the last few years. Not only was the music industry shaken to its core during the pandemic, the group lost longtime bassist Tim Feerick in April. To make matters worse, vocalist Tilian Pearson had accusations of sexual misconduct levied against him during the album rollout. Add on the multiple delays and obstacles during the Afterburner tour in 2021, and it’s a wonder the band is still standing to this day. If any band could make it this far, though, it’s DGD – a rare band spawning a subgenre and amassing a steadfast, rabid cult following supporting them every step of the way. Now, the time has come for the outfit’s tenth full LP, Jackpot Juicer, nearing twenty years of Dance Gavin Dance and showing no signs of slowing down with a whopping eighteen songs. Let’s dive right in and go track-by-track through Jackpot Juicer:

The first thing to address has to be the fact that Jackpot Juicer is the longest Dance Gavin Dance album – by a long shot. At one hour and three minutes, that tops their 2008 self-titled‘s fifty-two minute runtime. One may think fatigue, filler, and  would come into play, but fans can never get enough of a good thing, and Jackpot Juicer is filled with just that. Throw in Andrew Wells stepping up in vocal duties, guitar contributions from Martin Bianchi (Secret Band), Louie Baltazar (Wolf & Bear), Zachary Garren (Strawberry Girls), and a feature from Rob Damiani (Don Broco), and the variety at play makes for something to sate Dance Gavin Dance fans new and old.

Opening up with “Untitled II” (a homage to the opener of seminal Dance Gavin Dance album Downtown Battle Mountain), strings usher in what’s to come with a melody or two hinted at before smoothly transitioning into “Cream of the Crop”. It’s here that mere seconds in, listeners are bombarded with the trademark frenetic guitar riff and a vocal phrase begging you to sing along. Interspersed with mathy runs and a change of pace in the bridge, it’s vintage DGD setting the stage for Jackpot Juicer in this piece. Leadoff single “Synergy” follows, continuing the groove and featuring Rob Damiani’s signature voice in the process. Layering the octaves in the chorus means anyone can sing this infectious track – and I’ve done it myself without even noticing in the leadup to release.

“Holy Ghost Spirit” changes the pace with a deliberate pace with so much going on between dual guitars, a decadent vocal performance, and a strong melody throughout. It’s with this first non-single that, as usual, Dance Gavin Dance proves there just isn’t filler in their albums, a positive sign in the early goings of Jackpot Juicer. We get our first taste of Andrew Wells in “For the Jeers”‘ magnificently-groovy intro – something that was reserved as a guest feature in DGD’s past, but is a downright highlight in LP ten. While it’s a noteworthy addition, it doesn’t distract from this standout piece that’s so hip-swingingly congenial that it would find itself at home in the band’s earlier work like Happiness.

With “Ember”, the instrumental aspect of Dance Gavin Dance ekes out with Matt Mingus’ double pass pedal diving in and Feerick’s bass getting the spotlight for the first time. As Tilian Pearson belts “let me back inside!”, it’s layered so much it becomes a beautiful harmony, and I’m reminded of such a striking harmony in previous LP’s “One in a Million”. On to single number two in “Pop Off!”, the fun side of the band is on full display as Jon Mess both shouts and screams the track’s title. Accompanied with my favorite video in the band’s “Rat King” saga, it’s one of the band’s best outings with a climactic bridge followed by blaring snare hits.

As Mess begins “One Man’s Cringe” with “don’t listen to Acceptance Speeches“, the meta bits of Jackpot Juicer become a delight for Dance Gavin Dance fans. Bolstered by a gorgeous verse, more Wells/Pearson back-and-forth, and Will Swan’s best guitar riff on the record so far, it’s another standout as the record isn’t even halfway done yet. “Feels Bad Man” really showcases what Feerick was capable of on bass, as Mess experiments with his pitch in his vocal delivery to enjoyable effect. While not as strong as previous tracks, it’s still not a significant drop in quality.

“Die Another Day” was a personal favorite single of mine, from its fleeting mystique to its punishing blast beats reminding me of such Dance Gavin Dance tracks like “Legend” and “Deception”. Truly Pearson’s best work on Jackpot Juicer, his emphatic “Kill the king!” sets the pace for a massive closeout. “Two Secret Weapons” leans on the experimental side with a lot going on, sounding like a musical hodge-podge at points as the guitars sound less in-sync and more doing their own thing. With minimal Jon Mess on this song, he serves as a payoff as it comes to a close.

“Polka Dot Dobbins” has all the DNA of an archetypal Dance Gavin Dance song with flirty lyrics meshing with a chaotic Mess synchronization. One thing sticking out in Jackpot Juicer is that the last 30 seconds of each track is often the most enjoyable part of it, with this song’s triumphant breakdown riff getting my head banging without a sweat. After some lacking tracks, “Long Nights in Jail” picks the groove back up and asks you to dance with it. Injecting melody into riffs designed to be a singular note is still paying off for the band in 2022, as its meticulous Kris Crummett production makes everything shine an audible glossy glow.

Dance Gavin Dance has always been weird, and that’s exemplified in “Back on Deck”‘s odd guitar pedal effect in its verse that will turn more than one head. With the best bridge on the album, every member of the band has something special going on, capped off by Pearson’s highest note yet. Fans of the heavy songs of Dance Gavin Dance will have a field day with “Current Events”, with chugging double bass, guitar triplets, and an angry Mess. As it segues into something softer, it’s evident the range on Jackpot Juicer offers something for every DGD fan somewhere on the record. Within this track contains a Jon Mess section that I know every fan will be memeing up as soon as this LP drops.

“It’s evident the range on Jackpot Juicer offers something for every DGD fan somewhere on the record.”

Did I mention Dance Gavin Dance is groovy? Just in case I didn’t, they’re really, really groovy in “Pray to God For Your Mother”. As DGD albums close, I always find myself adoring the hell out of a song near the end with dark horses like “Chocolate Jackolope” and “Death of the Robot” feeling even more incredible than the band’s singles, and this song is just that. After completing this album, this jam stuck with me, both in my head on loop and as an example of how Jackpot Juicer showcases what makes this band so special even after all these years and records thanks to inventive guitarwork, unique vocal dynamics, and a collective sound that is paying dividends to this day.

“Swallowed by Eternity” puts Pearson at the forefront once more in a somber serenade, exclaiming “it’s a miracle that I got this far”. At song seventeen, it was a breeze getting this far experiencing some of the band’s best work to date. This grandiose track seriously feels like the magnum opus of Jackpot Juicer, but surprisingly there’s one more to close things out. “Have a Nice Life” wraps a bow on the album, and, yes, some of the best is saved for last. This is par for the course on DGD albums – “Man of the Year” is the band’s encore during live performances. This last offering has it all – soaring vocals, masterful drums, and a sense before it concludes that it really is over as all vocalists in the outro let you know that they’ll “go have a great life”.

When Jackpot Juicer was announced with eighteen songs, I thought back to when Joji’s Nectar announced the same amount; that record was a grower, and eventually became a favorite. My gut reaction may differ after I let Jackpot Juicer marinate, but it’s clear from the start that this record is, yet again, something special from Dance Gavin Dance. With some of the band’s best moments, everyone’s talent shining, and much more strong tracks than weak, this is essential post-hardcore listening that still manages to think outside the box. Anyone ready to sit through an hour of DGD will be rewarded with more than one melody stuck in their head for days to come. Hell – I’m circling back to “Pray to God For Your Mother” after I finish writing. Jackpot Juicer is proof that time and time again, whether it’s a complex guitar riff, a groove to sway to, a “what the heck” Jon Mess lyric, or any other reason, Dance Gavin Dance are one-of-a-kind and have perfected their formula.