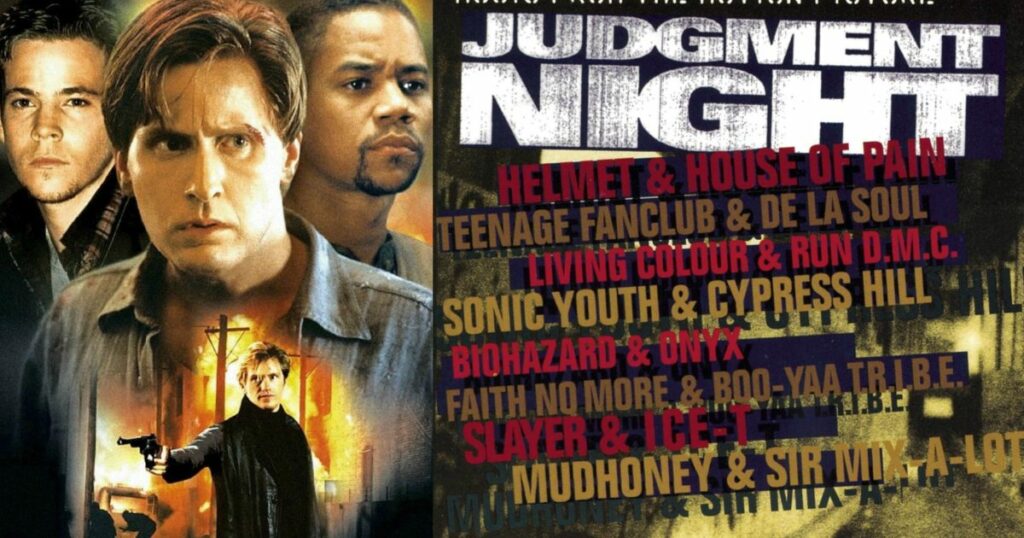 The year is 1993. Blockbusters like Jurassic Park are in theatres, Sony is a year away from dropping their groundbreaking PlayStation game system, and almost everyone is wearing flannel and listening to grunge. It’s the year of David Koresh and Waco, of the Clinton Administration and the approach of Britpop. And it was also the year a musical revolution years in the making would emerge into the mainstream spotlight.

Released just one year before Korn would essentially birth nu-metal with their self-titled debut full-length, 1993’s Judgment Night soundtrack was an ambitious rap-metal merger that proved a particular harbinger of what would happen when those two worlds collided. While the movie (which starred Emilio Estevez) is a decent watch, it was really a case of the soundtrack far outshining the movie. Not just in quality, but in the fact that it captures the musical climate of that year very well.

Though the collision between those seemingly disparate musical worlds existed many years before the soundtrack’s release, it was 1991’s Anthrax // Public Enemy version of “Bring The Noise” that proved heavier metal and hip-hop could, in fact, co-exist. Previously, those collaborations resulted in songs like Run-DMC and Aerosmith’s revamped version of “Walk This Way”, which opened up many doors for these kinds of crossovers. Interestingly, the revamped song was also the catalyst for Aerosmith’s mid-career recovery, as well as one that proved hip-hop was a commercially viable form of music that would only continue to explode in the years after its release. Cypress Hill and Faith No More made entire albums with these influences (and a host of others, too), while even mainstream (or soon to be) acts like Red Hot Chili Peppers would incorporate elements of these influences.

Considering the explosion of alternative rock, alternative metal, grunge, and hip-hop in the early ’90s, it only made sense that a link between these worlds would become more of a possibility. The result was the Judgment Night soundtrack, and the concept was simple – bring together some of the biggest grunge // alt-metal // alt-rock + hip-hop acts to create something new and fresh.

Armed with the big budgets of Immortal Records and Epic Soundtrax, there are some massive collabs here that still hold a lot of staying power. Seriously, Pearl Jam and Cypress Hill on “Real Thing”? Alt-metal vanguards Therapy? and the rap stylings of Fatal on “Come And Die”? Who thinks of this stuff, anyway? It all seems like a fever dream, except it really wasn’t.

Many of the collaborations sound like what you’d expect. Take Helmet and House Of Pain’s “Just Another Victim”, for instance. Setting the tone for the record immediately, it adeptly pairs Helmet’s influential (and abrasive) alternative metal sound with the hip-hop of House Of Pain, making for a rhythmic barrage that really comes to life. For the House Of Pain fans who might only have been familiar with their megahit “Jump Around” at the time, it proved a more hardcore hip-hop version of a popular sound. You also have the title track, featuring Biohazard and Onyx – no doubt one for the hardcore fans out there. It also works incredibly well, considering Biohazard were one of the biggest purveyors of hardcore-influenced rap-metal – they were from NYC, after all. Plus, Onyx and Biohazard had already collaborated on “Slam”, so you know they had to do it again.

Some of the pairings, while more out of left-field, are nonetheless exciting ones. Cypress Hill joins Sonic Youth this time for “I Love You Mary Jane”, a song title that really doesn’t need any introduction. Arguably the best of these collabs, though, is Living Colour + Run-DMC’s “Me, Myself & My Microphone”. If Run-DMC rapping over some incredible Vernon Reid riffs doesn’t excite you, we’re not really sure what to say. We haven’t even touched on Slayer and Ice-T covering The Exploited or Sir Mix-A-Lot working with Mudhoney on another song about…big butts. What a time to be alive.

It was at the end of the decade (and the beginning of the new millennium) that saw rock and hip-hop combos reaching their commercial apex. Linkin Park, Limp Bizkit, Korn, Deftones, Slipknot, and many more bands adeptly merged hip-hop, rock, metal, and alternative influences in their own different ways. They proceeded to sell millions upon millions of albums, as well. Yet, it was collaborations like these that no doubt inspired much of the genre you hear today. One can only wonder if we’ll ever get a collaboration like this again. Knocked Loose // JPEGMAFIA, maybe?