When Wrecking Ball got announced back on April 1st I thought for sure it was the most cruel April Fools joke ever. Here we are just days away from the festival and it is more than real. The organizers of Wrecking Ball have put together one of the most stacked lineups this scene has seen with plenty of bands that we never thought we would be able to cover. Read after the jump for a quick rundown of who we’re anticipating seeing in Atlanta. 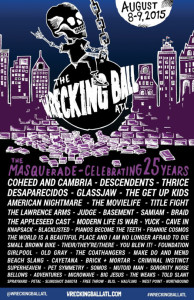 The first (and only) time that I’ve seen Coheed & Cambria live was back in 2007 at Warped Tour. It was the Long Island date & I had to leave early, but the last band that I was able to catch before leaving was Coheed. It’s such a memorable set for me because I can remember blasting their music the days leading up to warped tour—I was so excited to see them. I was fifteen, and I was just starting to listen to more music than just what was played on the radio. “Blood Red Summer” was the first song that I heard from them & I was so happy that they played it at the show. I’m not sure what to expect when I see them at Wrecking Ball. They released so many albums since I last saw them so I can’t even begining to imagine what they’ll play. The crowd watching them when I saw them was pretty small—all that I know is that that won’t be the case this time. (KL)

I’ve unfortunately never seen Desaparecidos live. The only time that I’ve seen any band that Conor Oberst is involved in was shortly after Bright Eyes released The People’s Key. The show was at the Williamsburg Waterfront in Brooklyn and it was an amazing concert! Since Conor has a wide variety of genres that he plays, I’m looking forward to seeing Desaparecidos at Wrecking Ball because I associate him with laid back & mellow crowds. Watching him perform with more aggressive and raw vocals is something that should be interesting. (KL)

Title Fight are a band that have definitely grown on me over time. I honestly wasn’t a fan at first, but then I found myself getting their songs stuck in my head. Earlier this year, I was able to catch two of their shows in two days. The amount of stage dives were unreal—the crowd was so lively & watching them scream the lyrics along with the band was amazing. Seeing them at Wrecking Ball is something that I’m looking forward to because their music has grown on me so much since I first heard them. (KL)

Sorority Noise are playing two sets at Wrecking Ball- a regular set with their own material, and then a cover set of The Smashing Pumpkins. I’m not sure why I slept on listening to Sorority Noise when I first started hearing about them from other people, but I feel kind of silly for not looking them up sooner. I caught their set last month when they were on tour with Motion City Soundtrack and at the time, I had only listened to them once before the show. Their live performance was intense, energetic, & definitely something that I’d like to see again. (KL)

I don’t know many other bands with this much raw intensity & emotion. Songs with such personal meanings behind them usually always get an emotional reaction from me, and Old Gray’s music is no different. I remember the first time that I listened to “Wolves”—the haunting opening vocals would get stuck in my head for hours. I unfortunately haven’t been able to see Old Gray as of yet, so I’m glad that they’ll be playing next weekend.  (KL)

While they don’t play shows often and are a band who hasn’t put out a full length album in over a decade, glassjaw have remained one of the most relevant bands in heavy music. They’ve built a cult following and Daryl Palumbo is a ridiculously talented (but polarizing) frontman. It’s been 12 years since I’ve seen the band perform, which is the longest gap between performances I’ve experienced.  There will be a couple new faces performing with the band, but I’m sure performance will be as good as ever. (NZ)

The Get Up Kids

The Get Up Kids are one of the reasons a lot of the bands at Wrecking Ball exist. The band are celebrating their 20th anniversary and it’s surreal that seeing them in 2015 is even a possibility.  I’ve been able to knock some bucket list bands off the list, but The Get Up Kids are up there towards the top.  This is where I use my bad pun of this performance really will be something to write home about. (NZ)

This weekend is full of bands that made me feel like I started going to shows a little too late.  By the time I started going to shows regularly American Nightmare were already at the end of their first run.  While I was never able to see them during their initial run, I still have the same feeling in my stomach as I did in the mid 2000’s listening to them.  American Nightmare are one of the more ferocious acts playing and I couldn’t be more excited.  (NZ)

This list is full of bands that I haven’t had the chance to see.  It’s not often that a lineup can have so many amazing and diverse bands while still having a bunch that I’ve never covered in any capacity.  When Basement announced their hiatus a few years ago I was crushed.  Every piece of music they had released had been flawless.  As soon as the tour dates were announced for this summer I knew that I had to make a trip to finally see the band.  Who knows when the next time these Englishmen will make their way back to the states. (NZ)

What’s better than seeing a band play one of their final shows in their hometown?  While it’s bittersweet finally getting the chance to see Foundation, I couldn’t imagine seeing them in a better place.  The band are playing two sets, first with Title Fight at one of the official after shows and then again Sunday afternoon.  I’ll be sure to catch both sets just to take in the experience of seeing them.  These are going to be some of the most intense sets of Wrecking Ball and should be a great beginning of the end of Foundation. (NZ)