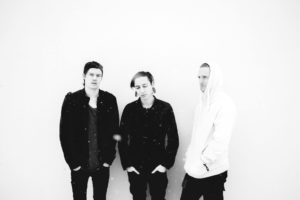 The Plot in You announced that they have signed to Stay Sick Records earlier this summer, and also brought to light that their very long-awaited third studio album would be released October 16, 2015. Check out the new single below.

It’s no surprise that I have high expectations for their 3rd album. When My Old Ways was released, I had noticed that the phrasing is similar to their first studio album, First Born. This is true in hindsight of the upcoming record, as it seems to be mainly story telling as Landon had mentioned in an interview earlier this year.

Take Me Away is a song Landon wrote for his grandfather when he passed away, and you can hear the emotion in his voice as the song progresses. It’s mainly clean vocals with Landon’s unclean vocals in the chorus. It’s still the hard-hitting type you expect from Plot but it’s much more meaningful than the band’s other releases. The aggressive vocals in the chorus do sound a bit low and underwhelming in the mix even though they’re powerful, but it may just be YouTube messing with the quality. The band has always been known to incorporate organic sounds and clips of things into their music, and Landon made the personal feeling of the track even more so at the end with a clip of his grandmother singing a song that Landon always heard her sing when he was young.

This is something you don’t want to sleep on. With only two singles out, The Plot in You is going to make a big wave with this record. To preorder this album, you can go to iTunes and also get an instant download of the track. To pre-order the physical copy and/or bundle, go to Merch Now.