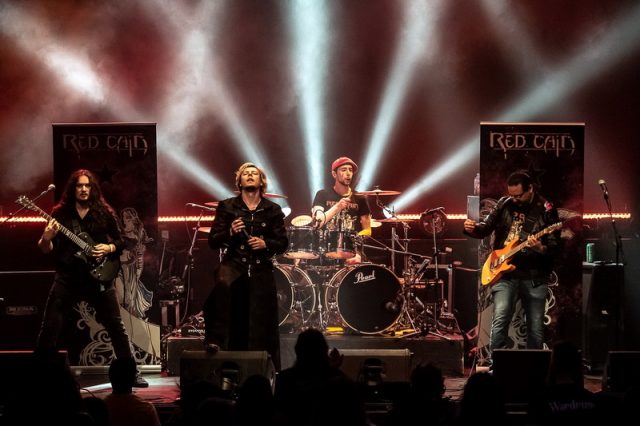 If you’re a prog fan, you’ve come to the right place today. Somewhere between the grandiosity of power metal and more progressive-leaning metal (think: Kamelot, Symphony X) lies Canada’s Red Cain. The band’s debut full-length, Kindred: Act I, dropped on Sliptrick Records recently, and was hailed by Dead Rhetoric as no less than a record that holds “multi-genre appeal”. Impressive stuff overall if you’re into what some of these bands are doing nowadays, and even more impressive for Red Cain considering it’s the band’s debut full-length.

We’re excited to be premiering the band’s new video for “Juliet” today, as well. The video for the single, which notably features Daniel Louden of Benevolent Like Quietus, can be seen below. This is the kind of progressive // power metal that’s intelligently written and performed, with plenty of accessibility for those who enjoy the more melodic side of things as well.

About the new video, the band had this to say:

“Deep forests, thick fog, American muscle cars, and Russian pagan goddesses. Part film-noir, part 80s road trip, dressed up with horror tropes and set to the “bubble-gum horror” stylings of goth rock banger “Juliet”, Red Cain is proud to drop our latest award-winning music film. Directed and produced by Rik Zak and Jun Ren, the film crew behind the band’s previous story video “ZERO” that took home 9 international film awards, “Juliet” tells the story of what happens when rock ‘n roll and occult forces collide on the roads of Americana. So buckle up, throw on your aviators, grab your Jackson Warrior, and make sure you’ve got the protection of Veles before you venture out into the open highway! “I saw her, lace and leather and hell, where serpents reign” – and now, so will you.”