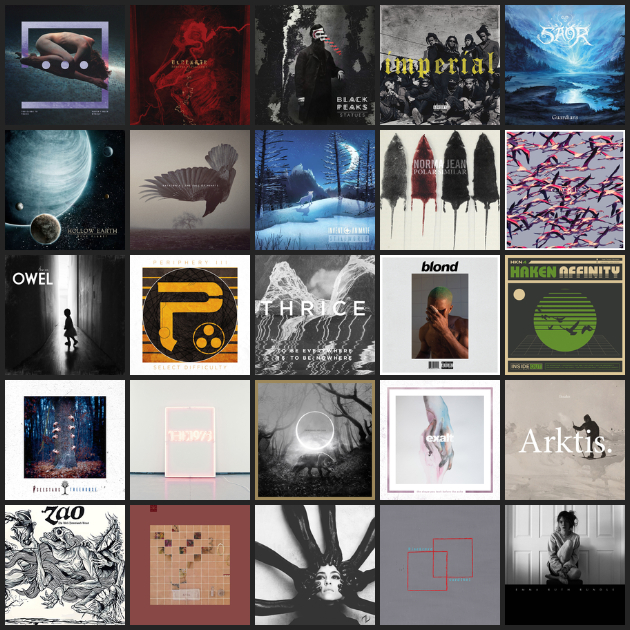 Here’s part III of our top 100 albums of 2016. You can find links to parts 1 and 2 below as well. The list rolls on with some familiar names, some newcomers, and a few surprises…

Dark. Resillient. Vulnerable. You could probably use all of these adjectives to describe the more nuanced aspects of Emma Ruth Rundle’s 2nd full-length, Marked For Death. The best way to color it, though, is that it’s an amalgamation of everything Emma has worked on her entire career – Red Sparowes, Marriages, and her previous solo work especially. There’s not really any discernible filler here, and the album gets somehow more personal as it rolls on, building up to the grand finale, the impactful “Real Big Sky”. It’s one of the best songs you’ll hear all year, from any genre.

Delivering on the promise of 2014’s solid Everchanger, Stillworld avoids the sophomore slump, and is an engaging, melodic slice of progressive metalcore. Punchy, yet clean production (from Will Putney) accentuates improved performances and songwriting across the board, and album highlights like the strong “White Wolf” and the near post-black metal sounding “Midnight Hymn” (seriously, listen to the blast beats in the middle of the song) hint that the band could spread its wings and create something truly groundbreaking. For now, however, Stillworld shows its tremendous staying power.

“White wolf, you are home.”

#48: Into The Vanishing Light (Night Verses)

ROSS. FUCKING. ROBINSON. Yes, he produced this album. And clearly, his influences pushed Night Verses to the absolute limit, both instrumentally and in terms of songwriting. ITVL has a low runtime than its predecessor, and it’s a more melodically inclined album overall. It’s also incredibly atmospheric and detailed for an album that supposedly falls somewhere in the post-hardcore genre, and of the albums he’s been a part of in his career, it’s arguably Douglas Robinson’s best vocal performance, period.

Haken is one of the leading lights of modern progressive rock/metal’s leading lights. Maintaining a remarkable string of excellent albums is no easy task, and 2013’s The Mountain was arguably the high point of their careers. So what does Haken do for an encore? Affinity is that album, and quite honestly, it will likely remind listeners of a more synth-driven version of Dream Theater’s Images And Words. This isn’t a bad thing, considering how influential the album was on most modern progressive metal bands. Affinity is a strong effort that captivates and meanders without ever sounding contrived or boring. Tracks like “The Architect” feel more like a meandering adventure and not a chore to get through. Modern prog can’t get much better than what bands like Haken are doing, and Affinity is proof of that.

The 1975 embodies all that is modern pop/indie rock music – a bit overindulgent, lengthy, and lyrically shallow. On The 1975’s debut album, those traits were very apparent, but there were also tons of hooks packed into every song. To be blunt, there is no sophomore slump here. The one-two punch of the ambitious, post-rock influenced “Lostmyhead” is followed in short order by the fantastic single “Somebody Else”, while other tracks like “UGH!” and “Love Me” wouldn’t feel out of place on INXS’s 1987 album Kick. This is indie pop/rock with high ambition, and with the lyrical abilities of the band much improved, The 1975 is clearly aiming for the stadiums. They’ll be at that level sooner than you think – but now they have the diversity to match.

The Well-Intentioned Virus is Zao’s best record since The Funeral Of God. It’s a chaotic metalcore album that is both reminscent of seminal works like Where Blood And Fire Bring Rest, while also exploring a sense of melody that hasn’t been touched on this well in a long time. Almost every modern metalcore band has been influenced by Zao in some way, and clearly the well isn’t running dry any time soon. Run, don’t walk, to listen to this. The best track here is probably “Xenophobe”, a vicious assault on the senses that matches the unstable political climate we live in. “It must be hell to live in fear.”

Statues, the debut album from progressive/alt-rock band Black Peaks, is awfully impressive. It might remind you of everyone from Oceansize (RIP) to their cohorts in Arcane Roots, but the album never sacrifices technical proficiency for a more accessible sound. Black Peaks is both. This is alt-rock that’s primed for the big stage.

Elements of doom, sludge, and metalcore collide on Dead Planet, the new full-length album from Hollow Earth. What Hollow Earth is doing here is fairly monumental – adding a hardcore-styled delivery to dense, sludgy music is pretty unique, and the apocalyptic feel of tracks like “To An Earth Abandoned” are not to be missed. It’s all over a bit too fast, but that also means Dead Planet won’t wear on the listener. Recommended.

Since the early 1990’s, Sweden’s Katatonia have evolved from a doom/gothic metal hybrid into an emotional, melancholy rock band that still manages to be heavy enough to be called “metal”. What’s impressive is that, while every album they’ve released has been high-quality, each work stands on its own through subtle differences. And on The Fall Of Hearts, Katatonia is at their most progressive yet – they’ve mastered their sense of melody, sure, but each instrument is given room to breathe as well. Also, listen to “Sanction”. One of the best tracks Katatonia have written, period.

Norma Jean have somehow gotten heavier and better with age. I’m really not sure how a veteran metalcore band (except this borders on sludge/doom metal at times) can release probably their best work on album #7, but here we are. Polar Similar is essentially a dense moon revolving around a planet. Cold, dark, and in motion. Seriously, part of “Everyone Talking Over Everyone Else” clearly has a Tool influence. If you thought Norma Jean were mediocre Botch ripoffs or something (which would be silly), you’ve clearly been underestimating them. This thing is a monster.

On Treehouse, the 5th full-length from veterans I See Stars, the band has cleared built their ultimate identity – a band that almost effortlessly combines electropop, post-hardcore, EDM, electronics, and massive pop hooks into a concotion that actually works. That’s not to say previous albums (especially 2013’s great New Demons) didn’t have their moments, but given that electronicore is itself a maligned genre, I See Stars have done well for themselves here. Tracks like “All In” are clearly a bid for the mainstream, with its trap/pop sound, but then there’s more textured moments like “Calm Snow” and album highlight “Yellow King”. I See Stars know exactly who they are now.

Chilly, icy, and ambitious are all words you could use to describe Ihsahn (AKA: that guy from Emperor) and his new album, Arktis.To Be Everywhere Is To Be Nowhere (Thrice)

Weird to think Thrice is now being played on Octane and even at a Money In The Bank match. The fact remains, though, Thrice is back. And they’re more vital than ever. With critiques of oil drilling on “Black Honey” and strong tracks like “Salt And Shadow” on point here, this ranks among the better Thrice outputs. And Dunstin Kensrue’s bluesy, soulful vocals haven’t sounded this could since The Alchemy Index’s Earth EP. A fantastic comeback, indeed.

Pinegrove’s Cardinal is an intriguing blend of emo, indie rock, folk. Tracks like “Waveform” and “Size of the Moon” breeze along relatively quickly, as does the album’s 30 minute run time. But when your songwriting is this good, why wouldn’t you trim the fat and make something memorable? Listeners will likely feel a strong emotional connection with the album, and the best quality about it is that it’s vulnerable.

Periphery is back with a new album. The progressive metal giants don’t actually “progress” much here, but there’s no song that’s less than average, and tracks like the bass-heavy “Absolomb” (that intro is spectacular) and finale “Lune” (a left-field closer that is probably the most unexpectedly emotional of their career) are worth listening to alone. Periphery clearly has the ability to make a groundbreaking album (their debut album could have been that, but their songwriting wasn’t as developed as it is now), but the band has found a comfortable niche between accessibility and technicality.

Laidback yet fairly complex, Frank Ocean is doing whatever he wants, on his terms. Blond is insecure vulnerability, confident bravado, and the endless dichotomy of the soul. “Self Control” and “White Ferrari” are merely two tracks on an album that’s full of highlights. Four years was worth the wait.

Atmospheric, folky black metal with a distinctly Scottish flair. Angery reacts only when you hear the bagpipes (but seriously, what a great addition!). One of the most interesting albums you’ll hear this year, as it really does make you imagine yourself in the vast landscapes of Scotland.

Some of the best drumming you’ll hear on any extreme metal album all year. It’s also Ulcerate’s best since 2009’s god-tier Everything Is Fire.

Denzel Curry is about to hit the hip-hop mainstream with Imperial. He’s been grinding away at the metaphorical whetstone since 2013’s Nostalgic 64, but Imperial is Curry at his wildest, most energetic best.

Raw vocals. Bright melodies. Great instrumentation. This is the formula for success on Downfall Of Gaia’s new post-black metal masterpiece, Atrophy. Listen up. Tracks like “Ephemerol” echo brilliance with every listen.

Stage Four is Touche Amore coming to grips with death and the loss of loved ones. “Eight Seconds” probably carries these emotional times most effectively. There’s even a bit of singing spread out on the album, which is a welcome experimentation to the band’s usual sound. You won’t find too many albums that convey loss like Stage Four does.

Spacey indie rock with clear post-rock influences abound on Dear Me, and while Owel have made an album that might be a bit long, it’s a fairly easy listen. The album is more than the sum of its influences – Tides Of Man, I The Mighty, and Moving Mountains loom large here – it’s an effective mixture of various sounds, into something that sounds unique, yet familiar. Owel is going to do huge things.

#28: The Shape You Took Before The Ache (Exalt)

Exalt takes the sound they established on 2014’s angry, ferocious Pale Light, and reach their logical tipping point. The angry bursts of hardcore and sludge metal are still here, but then you hear the Deftones filtered through hardcore aesthetic of “Worship” and you realize Exalt are clearly onto something new.

Listen to “Eiley”. Pure emotion from a standout alt-rock/post-hardcore hybrid.

Gore is probably Deftones’ least effective album since 1995’s Adrenaline. That said, it’s still a really good album, but it’s the overall sense of tension that may draw some people away from it (and maybe the production as well). The production is probably the reason why Gore is difficult to stomach (at first), but with songs like the career-defining “Phantom Bride” and the bold “Acid Hologram”, there’s also the obvious, accessible songs like “Prayers/Triangles” and the sludge metal-influenced “Doomed User”, which chugs along quite effectively.

It’s probably a testament to their supremely elite (heh) discography that Gore may seem a bit uninspired, because it’s still the alternative metal record that most bands would kill to write one of. It’s an album that prove Deftones are one of the most vital bands of the last 20 years – always evolving, yet maintaining a sense of familiarity.