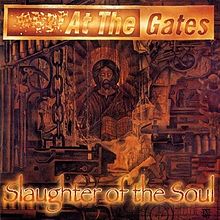 1995 was a revolutionary year in the melodic death metal world, that much is certain. Important releases from Dark Tranquility (The Gallery), In Flames (The Jester Race), and last but not least, At The Gates with Slaughter Of The Soul. At The Gates established a formula that dozens of metalcore bands would follow and recycle years later (Darkest Hour and Killswitch Engage are clearly indebted to them). Has it really been 20 years since its release? Apparently so.

Below, you can revisit the full album and take a look back on a revolutionary 35 minutes of music. Highlights include the title track, “Blinded By Fear”, and…oh who are we kidding? Just listen to it in its entirety.