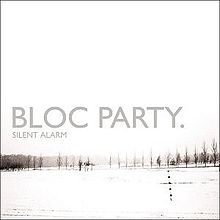 They may not be the same band today, but British indie rockers Bloc Party and their debut album Silent Alarm set off a veritable firestorm upon its release back in 2005. Seemingly overnight, the band was selling out massive venues, and seeing a litany of bands attempt to (unsuccessfully) copy their trademark sound. Hell, even “Helicopter” was featured on Guitar Hero III, marking many listeners’ first time hearing the band. Looking back, it’s really a testament to the British indie rock scene that an album of this magnitude could have even existed. The frantic drumming, the influences from Blur to U2 to The Smiths, and Kele Okereke’s passionate performance all add up to an album that has tremendous staying power even today.

Listen to the album below. Special attention should be paid to the opener “Like Eating Glass”, as its infectious energy never really goes away.