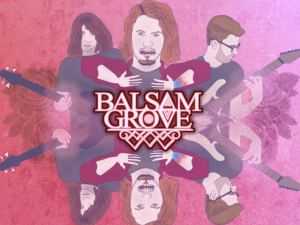 A three piece band from Texas, Balsam Grove is a band that wants to tell a story through adept lyricism and progressive post-hardcore sounds that emphasize technical finesse. With influences that trickle into their original instrumentals and vocal prowess such as Dance Gavin Dance, Saosin, and Underoath, it’s not hard to see such a sundry sound such as Balsam Grove gaining popularity much akin to the bands they are shaped by. The band formed in 2018 when Lee Hansen and Micheal Ermis met while studying sound recording at a community college in South Texas. The two were joined by drummer Bryan Renkes, guitarists Gavin Solis and Logan Wood, as well as producer Gigi Garcia who helped them record their debut EP.

Originally intended to just be a recording project, Hansen suggested forming a band after sharing demos and enjoying the bond they began to share after working togther for some time. The band released its first single, “Echoes of the Past” and its accompanying music video in July 2018. The success of their EP made some waves within the local media which then spanned to radio airplay. In December 2018, the band’s original lineup released its final single, “Civil Twilight” then announced their hiatus, unsure if the future of the band would come back with a new line-up or at all.

In 2019, things started to take a great turn for the band. Hansen and Ermis have since joined with Michigan guitarist/producer Jim Tobakos, who is also the band’s lead guitarist as well as a contributing songwriter. This change in lineup for Balsam Grove would then result in their self-titled debut full-length record, which will be released in Summer 2020. The album’s first single, “Brace Yourself!”

With distinctive, breakneck drum patterns teeming with silvery jazz-influenced guitar lines and emotional vocals that seem to sway between the abrupt and the contained, this track delivers a soundscape experience that is trip the light fantastic. The listener will find themselves immersed with a distinctive sound that they will be hitting the replay button again and again long after the track is finished. If this band continues to deliver such solid instrumental and vocal experiences, this Texan band may find themselves playing among the likes of their influential figures sooner than anyone thinks. Check out “Brace Yourself” in the link below and follow them on Spotify if you dig a wild progressive/hardcore tune potent with melodic bounce.