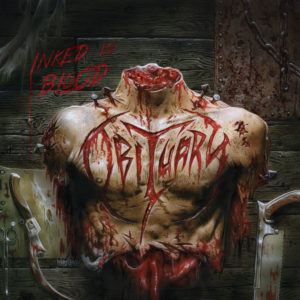 Obituary has a long history, both with me personally, and in the Death Metal scene in general. They remain one of my favorite bands in the genre, and have proven their competence among their peers and in a scene cluttered and saturated with acts looking to be the next, well…Obituary.

But I would be remiss in not stating Obituary’s spotty track record in terms of releases. If i’m to make comparisons, I feel that the presidency of Bill Clinton is oddly appropriate. Both did things that were spectacular, and both did things that were, to me, more than underwhelming. In terms of overall quality, these two moderate forces sort of occupy a middle ground.

So excited for my first presidential reference in a review.

Now, I won’t go into politics here, but like good ol’ Bill, when Obituary hits its stride, they hit it out of the park, to say the least, and while the new track “Violence” from the upcoming album, Inked in Blood (released Oct. 27), doesn’t match the gold standard quality hit on albums like Cause of Death or Slowly We Rot, it does come closer than their other recent releases with its raw, Thrashy sound and wild, reckless riffing. Let’s keep this one spinning and hope that, come October 27, Obituary releases a real monster for us to sink our teeth into.