Recently our photojournalist Savannah Rowley attended Sleeping with Sirens GOSSIP Tour in Orlando, FL. The line-up was stacked with Chase Atlantic, Palaye Royale, The White Noise, and of course, Sleeping with Sirens. The show came to the Beacham, originally scheduled for the Social. All the bands brought a lot of energy to the stage, and the interaction with the fans was insane. You can see photos of the event below:

END_OF_DOCUMENT_TOKEN_TO_BE_REPLACED 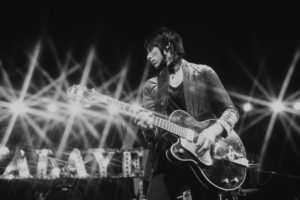 Our resident photographer Jillian Ragsdale snapped some photos of Sumerian Records rock band Palaye Royale at San Diego’s SOMA venue over the weekend. The band, whose rabid fanbase is a unique entity of its own, is supporting Sleeping With Sirens on their Gossip album release tour. Check out the photos below!

END_OF_DOCUMENT_TOKEN_TO_BE_REPLACED

The first track from the upcoming Sumerian Films movie American Satan has been released. Titled “Let Him Burn”, it features Andy Black in the video, but with Palaye Royale vocalist Remington Leith actually singing. However, the song, originally written by Lee McKinney and Nick Rossi for their new project In Motive, was demoed by vocalist Jonathan Wolfe of Vespera (whose first single “Bloom” has already racked up impressive accolades, including a Billboard premiere, in just 3 months). It’s a radically different version of the song with a grittier, more dynamic vocal performance. And while the just released song is a decent listen in its own right, it’s hard not to say which one is the better song overall.

But we’ll leave that for you to decide. Which version is better? The new version, or Wolfe’s demo version that was recorded in an apartment? Listen to both songs below, and let us know your thoughts.