Recently our photojournalist Savannah Rowley attended the Orlando date of The Witching Hour Tour, featuring In This Moment, P.O.D, New Year’s Day and DED. The show was packed full of people ready to rock out and enjoy an amazing theatrical … Continue reading → 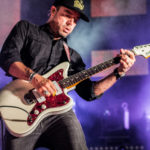 Recently our photojournalist Savannah Rowley was able to attend and photograph the Looking For Summer tour featuring Lifehouse and Switchfoot, with opener Brynn Elliot. The event was held August 26, 2017 at the Central Florida Fairgrounds in Orlando, FL. With Switchfoot playing well-known songs such as ” Hello Hurricane” and “Where I Belong”, while Lifehouse played some old favorites such as “You and Me” and “Halfway Gone,” it was an amazing show and a very interactive performance!

You can view the photos from the show below:

END_OF_DOCUMENT_TOKEN_TO_BE_REPLACED

Orlando, FL’s You Blew It! have announced details for their upcoming Weezer covers EP titled, You Blue It. Topshelf Records will release the EP digitally on July 15, followed by a vinyl release on August 12.

The 5 song EP, consisting of You Blew It!’s take on 5 classic Weezer tracks, follows on the heels of the 20th anniversary of the beloved alternative rock band’s eponymous debut studio LP, commonly referred to as “The Blue Album”. END_OF_DOCUMENT_TOKEN_TO_BE_REPLACED