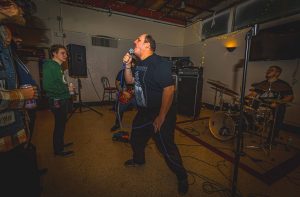 Over the next several weeks, we’re going to be discussing a handful of bands across our home state of Florida that we think you should know about. They will be across the spectrum in terms of style and genre. First we’ll be talking to vocalist Elliot from the heavy noise-rock trio Vacancy from St Pete.

END_OF_DOCUMENT_TOKEN_TO_BE_REPLACED

I had first heard of Sannhet after some buzz on the internet concerning their debut full-length record that they released last year, Known Flood. Unfortunately, I did not get around to listening to it at that time, but rather early on this year, and I do somewhat regret not listening to this monster of a record before then, as I was surely missing out. Sannhet are an instrumental trio from Brooklyn, New York and they have a large focus on experimentation, as Known Flood embraces many elements and ideas from post-rock, noise-rock, shoegaze, and even black metal in some spots.
END_OF_DOCUMENT_TOKEN_TO_BE_REPLACED