Since the early days of heavy metal, the genre has perpetually expanded in countless extremities. Many thought music could not possibly become any more extreme than some of the most intense artists to appear in the last twenty-five years within Death Metal, Black Metal, and more. However, one subgenre has remained hidden in the underground since the early 1990s and is starting to rapidly gain more attention in recent years. War Metal/Bestial Black Metal has truly combined some of metal’s most relentless aspects. Is Bestial Black Metal the most extreme subgenre to currently exist?

END_OF_DOCUMENT_TOKEN_TO_BE_REPLACED 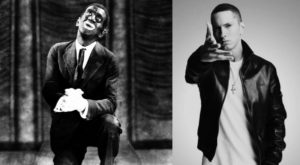 For many citizens of the United States, the idea of a “post-racial” America, one in which the horrifying transgressions of the past have been learned from and left behind, is a rather comforting one. To think that the nation has progressed so far – to a point where race no longer matters, to a place where racial minorities are no longer discriminated against systematically or institutionally – is more than a little uplifting. It is an idea that absolves white Americans of their history of oppression, for, in a post-racial America, none of that matters, right? None of that matters when the society and the majority no longer oppresses minority groups on a large, cultural scale.