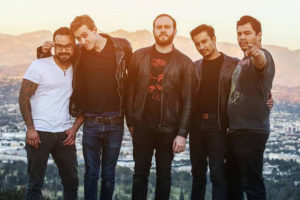 The Crown Remnant, a melodic groove metal powerhouse consisting of Geordy Shallan, Will Ash, Jorge Lopez, Josue Lara and Art Ramirez. The band formed in 2016, hailing from Los Angeles, California. They released their debut album “The Wicked King: Part I” in 2017, and are set to release their follow up “The Wicked King: Part II” on January 18, 2019 via Spooky Skeleton Records.