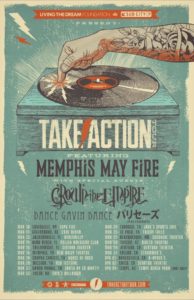 The Take Action! Tour kicked off on March 10, in Lousiville, Kentucky and their second stop just so happened to be in Greensboro, North Carolina. Featuring Palisades, Dance Gavin Dance, Crown the Empire and Memphis May Fire, I was more than excited to see these bands perform.

Unfortunately, due to traffic I arrived to the show much later than expected and missed the chance to see Palisades performance as a result of the venue starting the show at 6:30 (despite the fact the show wasn’t supposed to start until 7!). I would have enjoyed seeing Palisades play live but luckily I can catch them at Warped Tour since their playing all summer.

Misfortune was soon transposed into pure elation over Dance Gavin Dance setting foot on stage. I had no doubt in my mind that their performance would completely change the night from that point on. The energy they bring unto the stage is monumental, as if I had any doubts. If there is any way possible for myself to be a bigger fan of this band, it happened while singing my heart out during their set.

After neglecting seeing Crown the Empire the past years I’d been to Warped Tour in 2012 and 2013, I was ready to see what the Dallas, Texas band had to offer in their live performance. I had a lot of fun watching them perform and the crowd was lively. I wished I’d known more than just one song but I can surely say I’m a fan after seeing them on Wednesday.

Last but certainly not least, headliners Memphis May Fire took the stage. I’d watched their set at my date of Warped Tour 2013 and I wasn’t impressed – but everyone has off days, right? This is the mentality I had going into seeing them for the second time, and I was thoroughly impressed with their performance. The entire crowd was on their toes as the band played and they slowed down the pace a little bit before playing “Miles Away”, in which the entire mosh pit had sat down for the first minute of the song, which I felt was fitting and really sort of beautiful in a sense. All idea of thinking that Memphis May Fire had a bad live performance was thrown out the window.

If you have a chance to go to the Take Action! Tour, by all means, go. It was absolutely worth every penny I spent and I’d love to re-live that night. The air was heavy with a shared passion for music and it moved me considering I’d never experienced something like that before at any other show I’d ever been to.