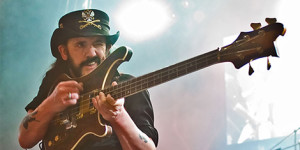 Motorhead frontman, hard rock and heavy metal icon Lemmy Kilmister died earlier today (12/28) at the age of 70. It has been confirmed by his manager.
–

Lemmy dealt with some serious health issues recently, forcing the indulgent rock legend to scale back on alcohol and kick his cigarette habit. Though Lemmy had made some positive steps forward, he had been struggling with poor health in recent months, leading to MOTÖRHEAD’s touring schedule being disrupted.

The rock icon recently claimed that he was doing just fine and was people to stop asking about his health.

He told Classic Rock: “I’m sick of the fucking, ‘Are you going to die?’ line of questioning. It’s getting really old, that question. I’m alright. I’m going out there and doing my best.

“I have good days and bad days but mostly I’ve been doing alright. The last tour of the States was very good.”

Lemmy, who turned 70 years old on December 24, told Classic Rock he had no intention of retiring.

He said: “It’s when you get to 60 when everything starts to go pear-shaped. Everyone thinks that becoming an older guy is easy, but you never consider it fully. It comes as quite a shock. But the thing is, I don’t want to give in to it.”

Lemmy previously said that he didn’t expect to still be here at 30.

“I don’t do regrets,” he said. “Regrets are pointless. It’s too late for regrets. You’ve already done it, haven’t you? You’ve lived your life. No point wishing you could change it.

“There are a couple of things I might have done differently, but nothing major; nothing that would have made that much of a difference.

“I’m pretty happy with the way things have turned out. I like to think I’ve brought a lot of joy to a lot of people all over the world. I’m true to myself and I’m straight with people.”

Asked if his illness has made him more aware of his own mortality, Lemmy said: “Death is an inevitability, isn’t it? You become more aware of that when you get to my age. I don’t worry about it. I’m ready for it. When I go, I want to go doing what I do best. If I died tomorrow, I couldn’t complain. It’s been good.”