2016 is more than halfway over, and naturally, there’s a lot of new music to show for it, some good, some bad, and most in between. It can be exceedingly difficult to keep up with all the new releases in a year, even for those tuned into various scenes, and Thrash metal seems particularly daunting, as the genre is so prolific, with new Exodus, Skeletonwitch, and Slayer clones popping up every day. The genre is not only huge, but largely monochromatic, making it very difficult to find bands and albums that stand out, and are worth one’s time.

Fear not, though. This handy guide has been assembled through extensive periods of research in order to provide Thrash fanatics with the year’s best, most interesting, and most diverse albums. There will be releases here that please fans of Traditional Thrash, Black Thrash, Death Thrash, and other variations of the genre. If you like Thrash, look no further before consulting this list as The New Fury takes you through 2016’s most essential Thrash albums (so far).

1. After All – Waves of Annihilation

If you like classic Thrash in the vein of Death Angel and Agent Steel, the this album is definitely for you. Waves of Annihilation is a perfect blend of fast-paced Traditional Thrash and Speed Metal with plenty of good hooks and melodic sensibilities to keep listeners coming back for more,

2. Acid Age – Like a Runaway Combine Harvester in a Field of Crippled Rabbits

A release as wild as the title would suggest, Acid Age have released an album that combines classic melodic Thrash riffs with more modern sensibilities, including a heavy does of technical Thrash chops that will surely please both new and old fans of the genre.

Beefy production and a penchant for heaviness bring to mind comparisons of Sepultura and even Sacred Reich, as this album does not abandon speed for said heaviness, with the exception of a couple mid-paced tracks that retain all the crushing tone without sacrificing aggression.

Dutifully living up to their name, Anger As Art have put out an album that is full of old-school Thrash aggression a-la Exodus and Slayer, without the breakneck speed or sloppiness of the latter. The release is certainly fast, though. Couple this with a self-aware sense of humor and some satisfying riffs and you get an album more than worth your time.

As the title suggests, this is pure old-school Crossover Thrash at its best, with a nice balance drawn between the two aspects of the whole. With a necessarily fun energy, and some absolutely killer riffs, this is not one to pass up for fans of Punk and Thrash alike.

Groove Metal they’re not, but they sure now how to groove in between classic high-speed Thrash riffs and dazzling solo work. While the lead players are more than solid, it’s the rhythm section that really bowls over on this one. Let’s hear it for breakdowns that aren’t boring!

While the production may leave some to be desired, the band’s heavy, beefy sound manages to come through all the same, making the release impressive on that merit alone. The album shifts gears enough, from heavy mid-paced Thrash to chugging speed riffs, to keep things interesting throughout this short release.

8. Disrupted – A Presence So Obscure

Disrupted walk a tightrope between Death Metal and Thrash, and play both extremely well. Utilizing both crushing heaviness and breakneck speeds, their recent album is an guttural exercise in primitive extremity that is likely to please fans of both genres.

This album is really something else. I’ve listened to a lot of Death Thrash albums this year, and this one is easily my favorite. Shifting endlessly from chaotic tremolo picked riffs, devastatingly heavy breakdowns, and full-speed Trash, this one really takes the cake for fans of Death Metal and Thrash alike.

A perfect return to form for the Thrash giants, Flotsam and Jetsam is menacing and melodic, aggressive and grooving, without missing a beat. Everything is here: great lead work, awesome hooks, and inventive riffs. The vocal delivery is spot-on, as is everything else that I could critique. The repetition on some choruses might be a bit much, but that’s a small criticism overall for such a great album.

Harm may hail from Norway, but their sound is very Teutonic, bringing to mind acts like Dew-Scented in particular. Slayer is another clear influence, but Harm’s approach is much more modern, differentiating themselves from Slayer clones that clutter the scene. The album is heavy, aggressive, and utterly unrelenting in its execution. Highly recommended.

Technical Thrash that is very rhythmically oriented, Darkchild comes across as being very math-y and progressive in a rhythmic sense, but not so much in terms of lead work. You won’t find very many shredded chromatic scales here, but the stunning rhythmic work more than sets it apart from the likes of their contemporaries.

A much faster Crossover Thrash release, leaning more towards Thrash than Punk, and thus, taking a page from the books of those like Nuclear Assault or Cross Examination. There are even some decent solos here and there. The production is a bit thin, but the riffs are fun and the vocal delivery is humorous without making the album a joke.

It’s refreshing to see a new Thrash band embrace more progressive elements. Inhalator are not afraid of longer song lengths, with the 9+ minute “Testtelen Tanc” incorporating plenty of epic sounds and elements. The riffs are catchy, and there are even some elements of Technical Thrash scattered about without becoming a noodle-fest. Not every band could pull this off, but Inhalator manage the feat with class.

Classic Black Thrash in the vein of Bathory, Venom, and Sodom’s debut album (to a lesser extent). There’s also plenty of influence from the early NWOBHM scene, with lots of melodic harmonized guitar sections. The band embrace this sound and commit to it, creating an album that sounds as if it came from the 80s, and is just as good as many classics from the era.

16. Machines of Living Death – The DOS of War

A computer and tech themed Thrash album with heavy Industrial elements? Sounds odd, but it turns out perfect. The vocals border on Death Metal and Industrial influence makes for a heavily thematic experience that is intense and wholly immersive. One of my personal favorites on this list.

17. Mass Hypnosis – Waiting for the End

The vocals may be hard to swallow for some, myself included, but the album has such a fun, uplifting sound that is absent from so many Thrash albums. The style is certainly more old-school than modern, but the whole release puts forth an X-factor type of energy that is too often missing from many albums in the scene.

An absolutely crushing slab of modern Thrash Metal, with a healthy dose of Groove Metal thrown in for good measure, and even some progressive elements to keep things interesting. Versos del Inframundo, through all it’s heaviness and intensity, also manages to be catchy, and to incorporate softer sections without feeling disjointed. No small feat nowadays.

Instrumental Thrash metal that manages, against all odds, to remain interesting and engaging throughout with a combination of dizzying rhythms, catchy melodies, and good production that lets every instrument, even the bass, have a good audible place in the mix. The album can also be downloaded for free on Bandcamp.

Mortillery has been one of my all-time favorite newer Metal bands for a long time now, and this new release only affirms this. With a strong sense of melody and old-school Thrash chops a-la Exciter, Nuclear Assault, and Holy Moses, Mortillery deliver again with possibly their best album to date, filled to the brim with their classic attitude that makes them a new Thrash staple.

There’s a lot going on here. Panik’s brand of Thrash is an amalgamation of highly technical and frenetic Prog Metal, Hardcore, and Death Metal. With so many influences intertwined and always present, Punish can get overwhelming, but for attentive listeners, it will also be immensely satisfying. There will be something new discovered with every listen.

Photian Schism’s self-titled album is a Crusty piece of Hardcore Thrash powered by D-Beat influences and angry as hell. The guitar tone is utterly biting, and overall, the sound is reminiscent of Toxic Holocaust, without the Black Metal. A fun, rage-filled listen.

A slab of heavy Crossover Thrash with some Death influence as well (“Mutilation” is covered here). The album cover a broad range from slow, dragging sections, to pure Speed Metal. It’s far from innovative, but it’s more than a good bit of fun for any fans of the genre.

More Thrash with heavy Crust Punk influence, Prowl serves up their brand of Hardcore Crossover with conviction and aggression – both of which are necessary in delivering an album such as this with any success. Both the Thrash and Punk aspects seem to be in equal supply hear, which bears attention, as often one is far more prevalent than the other.

Despite the unoriginal title, Reactory really deliver, and yes, it’s very heavy. The album specializes in solid, mid-paced Teutonic Thrash, without feeling the need to raise the speed too high at random. Reactory prove that breakneck speeds are needed to achieve potent Thrash.

Revolt are another refreshing Thrash band that doesn’t shy away from longer song lengths, and their brand of Technical Thrash never gets to be self-indulgent, often abandoning technical wizardry for sections that are more simplistically heavy or soaring and melodic. The hooks here are more than satisfying, as are all other aspects of this release.

This one is interesting, to say the least. Another album with long songs (one even getting to 11 minutes) that certainly has progressive elements, but upon listening, one finds these elements are understated, preferring to emphasize a brand of Thrash that is reminiscent of more modern Megadeth (think United Abominations), but is much more sure-footed than recent Megadeth albums could hope to be.

A wild amalgamation of Thrash, Hardcore, Post-Hardcore, and Alternative Metal. There are heavy doses of Every Time I Die and He is Legend influence here, and to be honest, the Thrash elements are rather subdued, showing up only sparsely, but there are enough to warrant its place on the list, along with the fact that the album really is quite good. 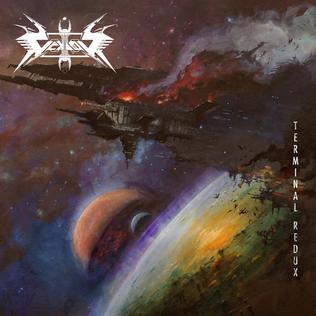 By now, Vektor should need no introduction. By many accounts, they are the best and most innovative Thrash band to be formed in the 2000’s, and that reputation is only cemented with this album, a Blackened Technical Thrash odyssey that blows any comparison out of the water.

Indonesian Thrash act Whiplash bring heaviness and dynamic lead guitar work to their debut release, making an album that is varied and fun, while still sticking to a basic blueprint of awesome old-school Thrash Metal. There are plenty of great moments here: soaring melodies, dynamic harmonies, and well-crafted solos.