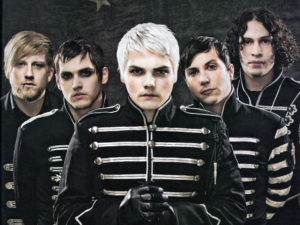 Two years ago the hugely famous rock band, My Chemical Romance fell apart. Front-man Gerard Way later commented that “the end of Black Parade felt like a very natural end” and when writing their fourth album, Danger Days: The Lives of the Fabulous Killjoys, he said he “felt like betraying some sort of artistic command that I had within myself”. It seemed that MCR was destined to hold their spot at the top, with their iconic album Black Parade, and that Gerard wasn’t ready to passionately continue onward afterwards.

But hold it right there! You read the title of this article; My Chemical Romance, ready to start again! So what’s happened recently that leads to such a brash conclusion? Well the astute eyes over at Kill The Music, noticed a few things that could prove that MCR isn’t ready to disappear yet.

First, the band’s break-up message has been removed from the website. Usually when bands decide to call it quits, they’ll leave their website in a state of inactivity with the break-up letter or reason for quitting at the top to be seen first.

Second, the “My Chemical Romance & Warner Bros. Records” copyright has been updated. Now if I understand the way this works (and I may not), this is something that both MCR and WBR have to do together, and it means that MCR can continue to publish music under WBR. Why would they do this otherwise? Well they may just be preserving the MCR-WBR relationship but there are fees that come with copyrighting, that can range from hundreds to thousands of dollars.

Third, it seems as though MCR has booked a show in Las Vegas for May 16 of this year. This could be a fluke, but it takes some effort to add a show to a band’s website, it’s not something that can be done with a few unintentional clicks.

Fourth, the band’s Twitter has stopped promoting their greatest hits album, May Death Never Stop You.

Sixth, MCR’s website’s Tour column says this. Come back when? When?! In my experience bands remove this tab completely when breaking-up, or at the very least they have a message referring back to the aforementioned break-up message.

There you have it! The six potential clues that could point towards My Chemical Romance getting back together, or at least playing a reunion show! Let us know in the comments what you make of this, and if it all pans out, who do you suspect would be the new MCR drummer?