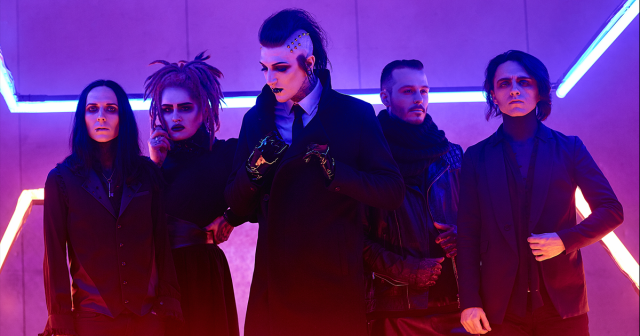 Pinch us if you’ve heard this before. Band _____ is working on “heavier”, “mature”, and/or “melodic” new music. They’re all buzzwords that industryheads and musicians alike enjoy using as descriptors, but in reality, do they really mean much? No matter. Motionless In White are one such band that you wouldn’t be surprised to hear going in a “heavier” direction, a year after the release of their successful album Disguise. However, with a plethora of tour dates the band had to cancel in the wake of the coronavirus, perhaps there is something for vocalist Chris Motionless to be angry about.

In a new interview (helpfully transcribed by Blabbermouth), Chris Motionless revealed the kind of music he’s been working on during the quarantine.

“It’s so funny how that works,” Cerulli told host Jose Mangin in a May 21 chat. “I said that one time [in a previous interview], and now I saw articles about, like, ‘New MOTIONLESS is gonna be heavy.’ I can neither confirm nor deny, ’cause it’s too early, but everything that I’ve been doing so far has been way heavier — probably because I’m so angry about missing all these tours and everything [due to the coronavirus pandemic]. But whatever happens happens — I’m just writing to write it and get some more in the bank.”

Also speaking to Detroit’s WRIF, Chris dished on the kind of emotions and vibes that are being drawn from the band’s upcoming material:

“I know our fans really enjoy our songs like ‘Another Life’ and the more laid-back or emotional tracks, which there will be those as well, but everything I’m doing myself lately has kind of been heavier,” he said. “And I’m just, like, ‘Where is all this coming from?’ I know I’m a quietly, or somewhat quietly, angry person, but it’s really coming out in the stuff I’ve been working on. So we’ll see what happens. I know there’s gonna be a mix, like there always is.”

Our takeaway? We’ll know when it’s actually released, but the band has certainly experienced more pressure in recent years as their status has grown. With “Another Life” becoming one of many MIW songs to chart high at rock radio, it’s easy to forget that not long ago, the band was pumping out over the top heavy tracks like “Immaculate Misconception”, so here’s hoping for that side of the band to re-emerge yet again.