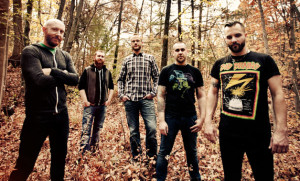 Seeing Killswitch Engage play Alive Or Just Breathing a couple years ago (in its entirety, no less) was quite an experience. Jesse Leach had just rejoined the band, and playing an iconic album front to back was just awesome to witness.

Rewind to 2002, an incredible 13 years ago. Metalcore band Killswitch Engage, who had already released a solid (but not financially succesful) self-titled album, were about to drop a nuclear bomb in the heavy music scene. Already coming from an area that produced bands like Unearth, Shadows Fall, and All That Remains, KSE released their landmark album Alive Or Just Breathing. But why is this album so influential?

In 2002, metalcore was hardly a thing. But the storm was coming – bands like Atreyu were getting signed, putting out debut records – even Eighteen Visions dropped their album Vanity the same year.

Killswitch Engage ended up being arguably the best (and most copied) of all, and likely the most original as well. The positive, uplifting lyrics of Jesse Leach (coupled with some absolutely plastering vocals), savage breakdowns, and a fantastic rhythm section helped Killswitch Engage reach the top of the metalcore heap, and helped spawn a massive wave of metalcore hitting the mainstream. The success never really ended, as bands like Bring Me The Horizon and Motionless In White (both quite clearly influenced by the metalcore scene in the Northeast) are placing incredibly high on the charts and running sold out, huge headline tours.

Alive Or Just Breathing is forward-thinking, positive, influential, and completely devoid of weak tracks. You can feel the passion burning in Jesse’s voice, and the music itself is timeless. You can be sure that Killswitch Engage will go down in history as one of the most consistently exceptional bands, and tracks like “Vide Infra” and “The Element Of One” will never lose their excellence.

Alive Or Just Breathing is an undeniable classic metalcore album that spawned a dozen imitators. And if imitation is the sincerest form of battery, well…