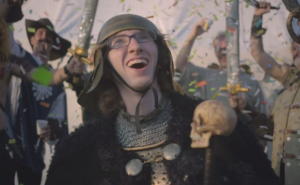 Mastodon have released an awesome video for “High Road,” a track off their upcoming album Once More ‘Round The Sun, featuring a kid trying to battle his way to the top.

Swords, battle axes, armor, and warriors can all be found in Mastodon’s new video. Yes… they’re made of rubber and plastic and the warriors are nothing more than pseudo-badasses who probably have to be home before dark, but it’s entertaining to watch. “High Road” is actually an amazing song, the video just makes it that much better.

Once More ‘Round the Sun is due out on June 24 via Reprise records. You can now pre-order the album using regular currency or even in Bitcoin.

Check out the awesome video below!