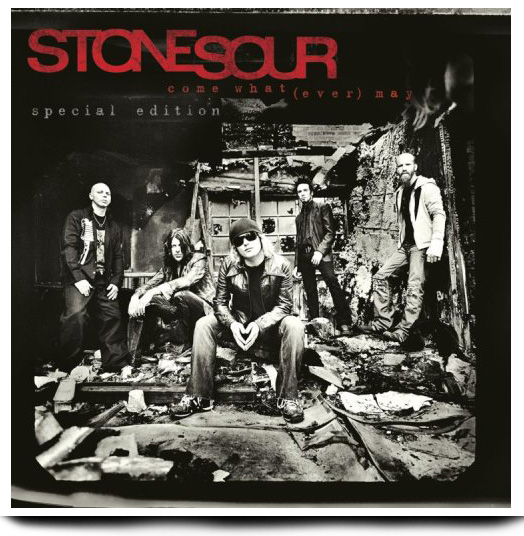 Side projects are a difficult thing to analyze indeed, both from a fan perspective as well as a critical one. Traditionally, the reasons for a side project are fairly linear – they tend to place emphasis on different aspects of the musician that won’t fit the main band(s), or a vehicle to explore and mess around with new styles and genres of music. Some of the biggest bands in history started off as side projects – notables ones include Gorillaz (Blur, Jamie Hewlett), Dashboard Confessional (Chris Carrabba, originally in Further Seems Forever), and of course, the ubiquitous solo album (Mike Shinoda, KISS, and entirely too many other musicians). While not all of these projects are commercially or critically successful, that’s not the point. If a side project explores new avenues of music, that always makes a musician more adept at their craft. Perhaps, the term “success” is actually relative in this market, but I digress.

Anyhow, Stone Sour – the side project of Corey Taylor of Slipknot, occupies a unique space in the rock and metal scenes. After all, Stone Sour was Taylor (and former member Jim Root’s) main project before Slipknot were signed in the late 90’s. In 2002, the band unleashed their self-titled debut album, which earned them Grammy nominations for “Get Inside” and “Inhale”, and while that record was a really solid start, it’s the 2006 follow-up Come What[ever] May that cemented Stone Sour as an act all their own.

Stone Sour, essentially, is the more accessible counterpart to Slipknot – a radio ready band that still has plenty of edge. Of course, there’s still metal running through the band’s veins, in all eras of the band. The band’s self-titled debut contained more of it, and while Come What[ever] May is a more accessible affair, that doesn’t mean it’s a bad album. Conversely, it’s the album where Stone Sour really started to spread their musical wings.

The quality within is enough to satisfy most fans of modern rock and alternative metal. While certain songs on the heavier side of the spectrum (“30-30-150”, “1st Person”) are more immediate (the former being a great single choice), it’s the more mid-tempo songs that contain a bit more depth. Take “Sillyworld”, for instance. While starting out as a slow, acoustic ballad, the song manages to transform itself into one with an explosive chorus and ending – one of the hallmarks of Stone Sour’s career to date. “Through Glass”, despite being overplayed on radio to death, is also a highlight – it’s easy to see how the acoustic-led ballad managed to gain so much traction.

Of course, ignoring the singles and the heavier tracks here is a mistake, considering how huge they sound. Lead single “30-30-150” is one of the album’s heaviest tracks, yet maintains a radio-ready sheen of accessibility that’s apparent in the Corey Taylor-led chorus. Undoubtedly, it works pretty well – but the song manages to set the stage for the one-two punch of the title track and “Hell & Consequences”. To be quite blunt, the latter song would have been a great choice as a single. Hearing its balance between accessibility and heaviness work so well is something that most bands of the genre aspire to – but never quite nail. This is true as well for the title track. While it somewhat suffers from a lack of lyrical depth, this isn’t a detriment at all. Not when the riffs are this tight.

Over a decade after its initial release, it’s easy to see why Come What(ever) May is one of Stone Sour’s best records. Defeating a sophomore slump entirely, the most impressive thing about the album is how it filters the accessiblity of post-grunge through an alternative metal lens. With a little something for everyone on the whole record, perhaps Come What(ever) May should be heralded even more than it already is.