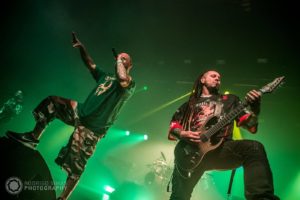 These last few months have been eventful, to say the least, for Five Finger Death Punch.
Back in November, the frontman, Ivan Moody, was replaced by Phil Labonte for their American tour, and two months ago, the frontman had a meltdown onstage, when he announced that he was leaving the band. But soon, he shared a statement on social medias to clarify his situation. He wouldn’t be leaving the band, but managing to deal with a side-project.

But now, things are getting serious again.

Yesterday, the band was performing in Tilburg, Netherlands, and the singer, after behaving weirdly and showing up late -Bad Wolves singer Tommy Vext apparently took the mic for the first two songs-, told the audience that this was his last show with FFDP. According to people in the audience, the band acted weirdly, played only about 40 minutes, going backstage between songs, and Jason Hook threw his guitar after Burn MF.

You can watch Moody’s announcement below :

In the same time, the band was teasing something for today on their Facebook page, which could be a tour, a new release, a new single… But according to what happenned last night, we can’t be sure that the band still wants to share this announcement today. 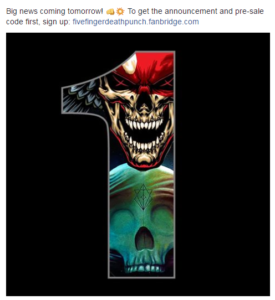 (Editor’s note : The announcement took place, the band will be touring across Europe this fall with In Flames and Of Mice & Men)

Unless this is some publicity drama, which we don’t want to believe.

Edit : FFDP‘s guitarist Zoltan Bathory expressed himself towards the situation, stating that this isn’t fake :

No dude not a publicity stunt. Just Murphy’s Law on full throttle or more like SpinalTap on 11 a lot of human & technical WTFs #itsRockNRoll

Of course we’ll update this as we get more informations.